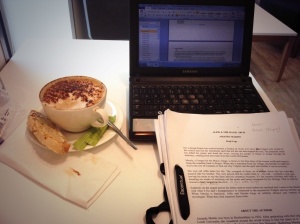 Not quitting yet, although putting this MS to one side

My psychotherapist once told me I see everything in black and white. The world is either coming to an end or it’s fantastic – there’s nothing in between. Unfortunately, true as it is, she didn’t give me a way to tackle it.

I have become better at keeping perspective, finding the positive, crawling away from the pit of despair (with a little medicinal assistance). But when I’m sleep-deprived and premenstrual all bets are off, drugs or no drugs. Then, a day or so later, I look back and roll my eyes. Get a grip.

And so it is this morning. When I think about my point of nadir yesterday – triggered by thinking I can’t write – I realise what went wrong. I took someone’s judgement of my first ever children’s book – and an early draft at that – as an indictment against ALL my writing.

Who did I think I was? Did I really think I could work on a novel for a couple of months – in a new genre – and it be anything other than pants? Particularly a novel written for a reason, rather than because the story demanded to be captured. My other novels took months, often with a big gap between first and second draft. The characters lived with me and demanded a voice.

So, I’ve eaten a snickers and stopped being a Diva. I got my first short but charming comment on Class Act today (“A very engaging romance”) after offering it free for a few weeks to get reviews. Phew! And I’ve come up with a new plan to fill my time until the end of term. It’s a crazy plan, but it’ll keep me busy.

I just wish I hadn’t involved the editor in my should I/shouldn’t I dramatics. I doubt she’ll ever work with me again, and she was really very good. I’m trying to remind myself of the phrase What someone else thinks of you is none of your business.