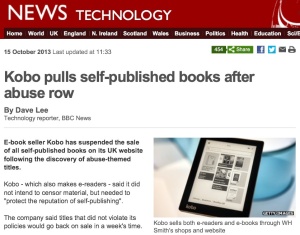 A couple of days ago I wrote about online retailers censoring self-published and indie books, referring to WH Smith / Kobo in the UK. Despite including this picture of the BBC news headline, “Kobo pulls self-published books after abuse row”, I didn’t really appreciate that there were two distinct (though overlapping) aspects to the scandal.

The first part, to do with censorship of erotica, I covered in my previous post. I personally don’t have a problem with restricting books that might be considered inappropriate (or ‘sick’ as one commenter defined them. Although I think these days sick means good, yes? I’m over thirty, I don’t know.)

The other element, that had passed me by, was the fact that Kobo blamed self-published authors for the whole affair. I caught up when I stumbled across the hashtag Kobogeddon on Twitter last night. UK-based author Rayne Hall started the hashtag to bring attention to Kobo’s hypocrisy and back-stabbing actions. Her blog posts on Goodreads here and here explain the full story, for anyone who doesn’t know the details. 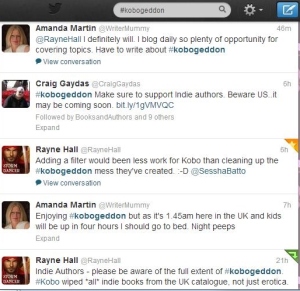 In summary, a UK newspaper pointed out to WH Smith that they had featured books on rape and incest alongside children’s books (I think we can all agree that something had to be done. Perhaps put an 18+ filter on all books containing erotica?). In reaction WH Smith took down their ebook website and their provider, Kobo, took down all UK books. (Not just UK authors, I believe US authors were affected, although their books are still available in the US).

Fine. They had to do something. I’ve worked in PR, I get that. But they only took down self-published books (and ALL of them, not just erotica): any traditionally published erotica is still available for all to see.

That was five days ago. As of now my books are still not available on Kobo, although I understand that books published directly through Kobo are starting to reappear.  Any of you who have read Dragon Wraiths, or Baby Blues & Wedding Shoes, or any one of the Claire installments on this blog that I collate into free books, will know there is nothing racier than a non-explicit sex scene or the occasional snog. Hardly risqué, Kobo. 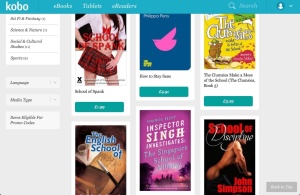 Kobo search results for “School of”

When I look down the list of categories on the left hand side there isn’t even an erotica category listed (although if you click in the book they are labelled as erotica, so the tagging is there).

I have restrictions enabled on my iPad to stop the children coming across things they shouldn’t (including books). Shame it doesn’t seem to work on any of the online retail sites. Smashwords at least has an adult filter, although it seems not all authors are using it. Self-published authors do need to take some responsibility for correctly tagging their books.

But Kobo has got it all wrong. Indie and Self-Published authors are not the only problem. Even if authors are not correctly labelling their books as ‘adult’, it still only represents a proportion of all books. By taking down everything, with no explanation (unless authors are published directly with them) they haven’t just chucked the baby out with the bath water, they’ve thrown the cash cow over a cliff.

Like it or not, self-publishing is part of the future of the book industry and pissing off authors is a really bad idea. I don’t need Kobo. According to my Smashwords stats I haven’t had a single book downloaded from Kobo since the beginning (although I might be in trouble if Barnes and Noble decide they don’t want to publish my books). I have other routes to market. Do they?

Please spread the word, whether you’re in the UK or not. If possible, buy your ebooks from another source. Direct from Smashwords is best. Support your Indie authors! We thank you for it. 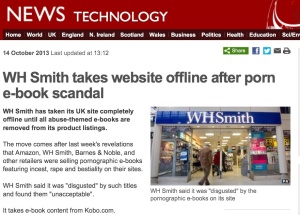 The story as it unfolds

Some worrying news has trickled through to me this week, through various sources, that Amazon, Barnes & Noble and particularly Kobo are censoring Self-Published/Indie Published books. As far as I can gather, from reading posts on Shannon Thompson’s Facebook wall – here and here – and through statements from Smashwords, the concern is specific types of erotica, such as incest or rape themed books, but may easily stretch into all Indie Publishing.

WH Smith, who sell Kobo books in the UK, took down ALL self-published books in response to criticism over some of the content they apparently unknowingly stocked.

Going forward, I think we can expect this to become the new reality as major retailers set their sights on a global market where the cultural, religious or political norms in some countries will find certain categories of erotica too objectionable, or might find non-erotic categories that most western cultures consider mainstream as too objectionable.  This means we can expect more mess to come in the years ahead as the industry navigates ebook globalization [My emphasis]

Now I have to be honest, this isn’t a straightforward debate for me. My mind is surging with conflicting emotions. Paramount is the thought “Oh my goodness, if they start deleting Indie books, there goes my five-year plan. Amazon is already censoring reviews (I’ve had at least three reviews of my books deleted and lord knows how many more I don’t know about). I’ll have to give up writing and get a job.”

This might seem like an overreaction when I write books with no sex in them, never mind erotica. But, as Smashwords points out, this may well not just stop at erotica but might cover any area that’s considered taboo in a certain culture. Shannon points out on her blog that the legal age of drinking between the UK and the US is different, so might books featuring a teenager drinking be banned in the US?

Then of course comes the view that refusing to publish any kind of books is bad. It’s censorship, it’s against free speech, it’s harking back to the days of banning and burning books for not fitting in with the social mores of its time. As one commenter points out on Shannon’s blog, though, it isn’t actually against free speech, because these companies are businesses and have every right to sell what they choose. Even so, it still isn’t good news for Indie authors like me.

I don’t want my daughter growing up in a world where people have had easy access to books promoting rape. There’s something about an idea being written down that gives it gravitas. You write about rape in a book, make it sound like a cool thing, and somebody somewhere is going to feel like that gives them a green light.

In an article on the Christian Science Monitor (which I found through Shannon’s blog) someone defends the erotica ebooks by saying:

So it’s okay if it’s in a book, with fake characters? I should agree, yes of course. Except I’ve read books that have changed the way I think. They’ve actually rewired my brain to see the world a different way. That’s the power of fiction (as so beautifully argued in a lecture by Neil Gaiman recently:

When you watch TV or see a film, you are looking at things happening to other people. Prose fiction is something you build up from 26 letters and a handful of punctuation marks, and you, and you alone, using your imagination, create a world and people it and look out through other eyes. You get to feel things, visit places and worlds you would never otherwise know. You learn that everyone else out there is a me, as well. You’re being someone else, and when you return to your own world, you’re going to be slightly changed. 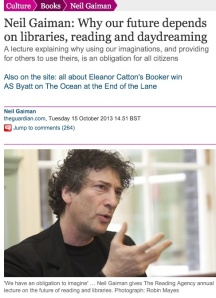 Neil also says, “We have an obligation [as writers] to make things beautiful. Not to leave the world uglier than we found it” but that’s an entirely different argument against some of these books!

There is a petition on Change.org that I will probably sign, but I am having to think twice about it. The petition does say **This petition is NOT condoning non-fictional beastiality, incest, pediphilia or other things of such ‘extreme’ nature**.

Non-fictional? What about fictional? Also, there are some views in the comments that I don’t agree with. For example someone says you need a credit card to buy the books, so you’re obviously over 18. Except what about the free sample? I’ve downloaded the first few chapters of plenty of books without having to pay for them, and many of them I wouldn’t want my daughter to read at any age.

It’s a difficult debate and I hate not knowing what side of the fence I sit on. If Amazon and other online retailers delete my books, I’m back to square one: trying to fight my way in through the agent/publisher route. And I believe we’ll all be the poorer for stopping the publishing revolution before it’s even got underway. However there is no doubt that there are books out there that ruin the image of self-publishing for all of us, never mind books I wouldn’t want my kids to have access to.

Where do you sit?

Related articles (only a selection – there are hundreds!)