Breakfast out with Mummy

Today was one of those days when I forgot that I’m the grown up.

I had my daughter home alone all day for the first time since my son was six months old (I think, maybe apart from illness).

Even though we had a day full of activities – shopping for school stuff, doing craft, going to the park – it was not a great day. I’m so used to having both children together that I’d forgotten how much more time consuming it is just having one. You can’t send them out to play or sit them in front of the TV. I haven’t had to do nine hours of continuous childcare since the youngest was a year old and able to keep up with his sister.

Staying up late to finish my blog last night didn’t prepare me well for the day. I lay awake with W8-BEN forms and proofreading queries floating through my head and didn’t drop off until 3am. 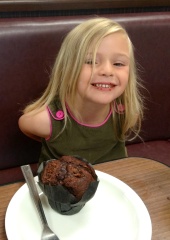 My son woke around 5.30am, crying and calling, “Mummy, why did the man take the flowers?” I went in and answered (as only a mother can, I guess), “Because he wanted them for Aunt Polly” (it was from a TV show we watched earlier in the day.) So that was my chance of four continuous hours of sleep gone.

I did try to be a good parent. I barely opened my ipad, except to take photographs and have a cheeky check on my email. I only did twenty minutes of’ proofreading, and shut my laptop when my daughter asked for a cuddle because she missed her brother.

I took another twenty minutes to Vax the playroom, where the dog was sick overnight, and even that had her whining. I tried so hard, but she missed her brother and she was just plain horrid for much of the day. And, on three hours’ sleep, I’m ashamed to say I took it personally. By the time we picked my son up at 5.30pm I was ready to drop them both home and keep driving.

Then, of course, they squabbled non-stop from the moment we all got in: mostly about who would get to sit in the corner of the sofa (their latest battle ground. Give me strength.)

Craft picture ‘for her teachers’

When you’ve missed someone all day it’s natural to pick a fight with them: I do it with my hubbie all the time. But I didn’t have any patience left for the noise. Hubbie was off talking to some person about cars, I hadn’t had three minutes to even empty the dishwasher.

I confess, I yelled. I went and hid in the playhouse. I would have driven away, if I’d had the energy to open the gates to get the car out. I’m not proud, but there you go.

Then, as I put our son to bed (after they’d squabbled over who was going to take them to bed: even though I ALWAYS take our son) I heard my daughter sobbing hysterically downstairs. I admit it only irritated me. I’d given her everything I had and it wasn’t enough. Instead she spent the day being bossy and rude and ungrateful. I’d tried to ask my Mum and my hubbie for help and both had ignored my plea. I’d had enough.

A pipe cleaner swing and person

When I got downstairs, hubbie explained that our daughter is scared about starting school. The wait is making her crazy (she doesn’t even start until next Monday, and then it’ll be three weeks before she’s full time). Being home alone today had driven it home that things were changing, and she wanted to just get on with it and get the wait over with.

The signs had been there during the day – talking about making gifts for her preschool teachers, her new teachers, wanting her school bag and everything ready. She’d been worried and I hadn’t noticed. I was so wrapped up in my own sleep-deprived misery.

So, with hubbie mediation, we talked. I showed her the list of questions I’ve been compiling for her teacher’s home visit on Friday. I said that she wouldn’t be the only one who didn’t know everything and not to worry.

I tried to be the grown up. It was a bit late, I think. I should have been that person all day. I remember times, as a child, when Mum would hide in the tree house with a drink. I never understood it. Today I understood. Sometimes you don’t want to be the grown-up, especially when you have to be. Mum was a single parent at that time: what excuse do I have?

Tomorrow, I will try to be a grown-up. Today, I’m going to have a glass of wine, think of something for Claire to do, and go to bed.

After hours spent worrying that Josh would somehow arrange for them to share a double room, Claire’s relief at being placed in a dorm was short-lived.

I might as well have shared with Josh; he can practically hug me from his bed anyway.

The room was tiny. With eight people and their luggage crammed in, it felt like a train carriage rather than a bedroom. Considering how expensive it was for the dorm, not to mention the deposit for the cutlery, Claire wasn’t impressed.

I thought it’d be cheaper to travel here than at home, given the high volume of traffic coming through some of these places. And who ever heard of paying a deposit to use a fork? Barmy.

Not wanting to spoil her trip by worrying about money, Claire dropped her rucksack on the bed and followed Bethan, Josh and the other people from the bus, out of the room.

Claire could see the beach as they left the hostel. Fine golden sand and clear blue water stretched away from her. She could imagine running straight into the sea in summer. Now, with an autumnal nip in the air, she was content to dig her toes in the sand and soak in the beauty.

She sensed Josh shadowing her steps, as she walked beside Bethan and chatted about the accommodation and where to go for dinner. Bethan kept glancing behind her, a frown on her flawless face.

“So, what is it with you and the moody doctor?”

Speeding up to open the gap between them and Josh, Claire leant in close to Bethan and said, as nonchalantly as she could, “He’s just someone I met while travelling in the UK. We shared a ride for a couple of weeks. He lives in Oz and popped over to say hi.”

“Claire, no one flies from Australia to New Zealand to say hi. That’s what phones are for. They certainly don’t hop on the bus with you or follow you round like a lost puppy.”

The girl snorted in response. “That’s not an answer, that’s a Facebook relationship status. Are you shagging him, or what? And if not, can I?” Her deep, throaty, laugh rolled around the half-empty beach.

“Bethan! Hush, he’ll hear you.” Claire prayed for the sand to open before her and swallow her up.

“He’s married.” Claire’s voice dropped like water on a fire. If she expected her words to dampen Bethan’s enthusiasm, she hadn’t counted on the girl’s tenacity.

“And? If he was happily married he wouldn’t be here. Has he ditched the wife? Are you the replacement? You must have made a hell of an impression on him in a short time.”

Claire looked round to make sure Josh wasn’t hanging on every word. She could see him further up the beach, in a circle with some lads from the bus. As if sensing her scrutiny, he turned and waved when he saw her watching. She quickly turned away.

“Honestly? I have no idea what’s going on. I won’t deny that I fancied him when we travelled together, but I didn’t know he was married then. Now I’ve met his wife, and his three kids, and being a home breaker isn’t my style.”

“So, what are you going to do? He’s clearly crazy about you and, I have to say, you talk a good talk but I’m not buying it.”

Claire looked across at her friend, trying to read the meaning in her dark eyes.

What is it about travelling that makes you confide in complete strangers? Is it that there’s no one else, or that you’re all in it together. Maybe just the fact that you’re unlikely to ever see them again. Not that that’s worked for me. I’ve bumped into Maggie, Josh and even Bethan more than once.

Claire kicked her feet in the surf and sighed. “What a mess.”

“Why not just bed him and move on? If he’s serious about leaving the wife, there’s nothing you can do about it. If he isn’t, then sleeping with you will bring him to his senses.”

The blunt practicality of the girl’s tone made Claire shrivel. Despite her near miss with the Scotsman, she wasn’t in the habit of bed hopping. And, underneath his current puppy dog behaviour, Josh was still a good friend. She didn’t want to risk that by giving in to his lures. And yet, deep in her gut, she yearned to surrender.

With another gusty sigh she shook her head. “We’ll see,”

For some reason it made Bethan giggle all the way back to the hostel.