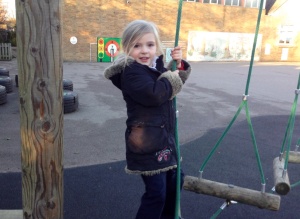 The sun came out to play today. We had planned to go swimming but a last minute check of the website revealed that the pool was closed for a gala. I wasn’t disappointed, as it meant we got to go to the farm instead. With the strange orange globe in the sky warming our skin we watched the children ride ponies, feed goats and bet on racing pigs. Glorious.

It was still sunny, wind-less and dry when we got home, so the children were able to play on the trampoline and climbing frame (even if it did mean de-pooping the lawn, only for the kids to go back in to the playroom five minutes later).

Then I sat watching Olympics on the iPad while the kids did puzzles and the open patio doors let in a cool afternoon breeze. A tiny taste of summer.

I’m praying to the Universe that this weather holds for half term. Parenting is always easier outdoors and I appear to still be woefully all out of patience.

The fact that I spent the day still in a grump shows me, more than anything, that I need some help restoring my mental balance. And before summer arrives for real. Now there’s a target.

P.S. Baby Blues & Wedding Shoes  and Dragon Wraiths are both (hopefully) 99c currently on Amazon.com. I’m trying out the KDP Countdown Promotion but it’s not going to plan as a) my new covers don’t seem to have loaded, b) I couldn’t do a countdown deal on the UK site because my book was too cheap (even though Amazon set the UK sale price) and c) I can’t see if the countdown deal has gone live – even though it’s meant to be there for the next 30 hours – so I daren’t promote it. However, if you’re in the US and want to grab my books for a bargain, click the links (and let me know if it works!)