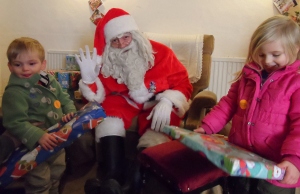 At dinner last night my friends and I discussed the challenge of maintaining the Christmas magic with our children. Do you lie? Evade, prevaricate? Are robins secretly Santa’s spies, identified by their red breasts? Or is the red flashing light of the security system Saint Nic keeping an eye on who is being naughty or nice? Do you have an elf on the shelf to watch over and guarantee belief and good behaviour?

And it got me thinking. In the end is it about magic, or is it about faith? Or even control. We talk of the magic of Christmas but it does seem it comes hand in hand with mild threats to ensure good behaviour. I read a quote on Goodreads once that compared belief in Father Christmas to belief in God:

“Be sure to lie to your kids about the benevolent, all-seeing Santa Claus. It will prepare them for an adulthood of believing in God.”
― Scott Dikkers, You Are Worthless: Depressing Nuggets of Wisdom Sure to Ruin Your Day

I was reminded of the quote during my daughter’s Nativity this week. Towards the end, the audience stood to sing along with two carols. I love carols normally, and thought I knew them all, but was surprised by a verse in Once In Royal David’s City that I hadn’t seen before, containing these lines:

“Christian children all must be
Mild, obedient, good as he.”

What’s not to love?

Interestingly as I googled it for this post I found some versions of the lyrics without this verse, and some saying “should be” rather than “must be”. I’m clearly not the only person who struggles with the concept of telling my children to model their behaviour on baby Jesus, who had a helping hand in being a good child because he was the son of God and all that. And yet we tell our children to be obedient, mild, good, if they want Father Christmas to come. What mother won’t use everything at her disposal in those frantic weeks leading up to the big day?

Maybe that’s my problem with it all. I’m agnostic. My belief tends towards Nature or the Universe or some Spirit of Humanity, rather than an all-seeing, all-knowing, all-powerful being. I respect the idea of Faith in God – envy it sometimes – but don’t have it. My husband is atheist. So, between us, we don’t believe in invisible beings watching and controlling our lives.

My daughter goes to a Church of England school and I’m okay with that. Christianity is more than a religion. It’s part of my country’s heritage. She should know the tenets of the faith so she can choose later what she believes, armed with some knowledge.

I went to a non CofE primary school until I was eight years old, and moved to where I live now. I didn’t know the Lord’s Prayer or any hymns, and my school friends were amazed. I’m glad that my daughter will learn them, if only for when she goes to weddings as an adult!

Besides, religion teaches forgiveness and love and good deeds, and who doesn’t want their child to learn all that? My role, as I see it, is to temper the school’s teachings by allowing her to question what she learns (not that I’m even remotely qualified to answer her questions!)

However, if I let her challenge the stories of the bible, should I let her question the existence of Father Christmas? Already she doesn’t really seem to believe all that much. She said of her letter from Santa, “That’s really from you, Mummy, isn’t it?” and thankfully I didn’t actually have to lie because it came from a charity. Still it’s close to lying. She’s only four but I sense it won’t be long before she asks me outright if it’s all true. When that time comes, should I destroy faith, destroy the magic, or deceive a child and potentially break her faith in the honesty of a parent? 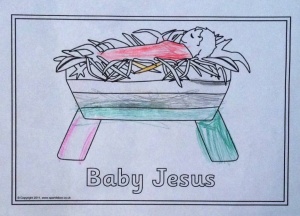 Daughter learns about Jesus at school

My good friend solved the dilemma by taking her child, at five years old, to Lapland to meet the man himself. Pricey but maybe worth it to preserve the magic. I wonder if even that would work for my little girl (particularly as she hates the cold and snow!) even if we could afford it.

And, if belief in Father Christmas is like religion, surely meeting the man defeats the object? Isn’t the whole point to have faith without evidence? Like the ironic line from Leonard Cohen’s Hallelujah, “Your faith was strong but you needed proof.”

(Incidentally, for some great discussions on faith and religion you can’t do better than Terry Pratchett’s Discworld novels, particularly Carpe Jugulum. Granny Weatherwax’s best quote is this one:

“You say that you people don’t burn folk and sacrifice people anymore, but that’s what true faith would mean, y’see? Sacrificin’ your own life, one day at a time, to the flame, declarin’ the truth of it, workin’ for it, breathin’ the soul of it. That’s religion. Anything else is just . . . is just bein’ nice. And a way of keepin’ in touch with the neighbors.” )

Anyway, we seem to be okay for now. She accepts the existence of baby Jesus, she accepts the concept of Father Christmas. She’s excited about getting gifts and spending time with the family, but mostly she looks forward to opening her chocolate advent calendar every day and can’t wait until the end of term. Exhausted and tearful and tired, I think she’s approaching the arrival of Christmas pretty much as I am: with relief!

“Can I come and see you this weekend?”

There was an air of forced casualness in Conor’s words. Claire cradled the phone to her ear and looked out her bedroom window at the view down the hill to the sea. The hostel was a million miles away from the one in Swanage: clean, bright, modern, with comfy beds and duvets, and en-suite facilities. Despite the ache in her chest that told her she missed Conor, she was happy to be there by herself. Still the weekend was a few days away, who knew how she might feel by then.

“I don’t have to come, if you’d rather be alone.” Conor’s voice sounded strained and Claire felt a shiver run across her skin.

“Yes, of course you can come this weekend. Sorry, I didn’t mean to hesitate; I was just trying to work out which hostel I’ll be in by then.” A small white lie to take away the hurt.

“Why don’t you ring around for a private room and let me know what you find?”

Now his words made her shiver in anticipation and she smiled. “You’re on.”

Claire leant against the wall and chatted about surfing, and the hostel, and her call home to catch up with her nephews. It felt strange, talking about things outside work. Conor listened attentively, asking questions and adding his opinion. Claire realised it had been a long time since she’d had a grown-up conversation with someone other than Kim. As the thought drifted through her mind, she remembered that Kim had wanted to catch up with her after the Carnival.

“Damn.” Her outburst cut through Conor’s review of a band he had seen the week before.

“I just remembered that Kim wanted me to visit her this weekend, because her sister is home from Hong Kong. What with everything, I completely forgot. She’s going to kill me, I haven’t even called. That’s two lots of people I’ve let down in as many weeks.”

“Sure but it’s my fault, Claire. I kept you busy with work for the Carnival and then, well…” He trailed off.

Claire put a hand to her forehead, trying to subdue the stabbing pain in her temples. “Look, I need to call Kim. Can I get back to you about the weekend?”

“Of course. Your friends need to come first, I’ll still be here.”

Claire couldn’t quite read his words. Was he not classing himself as a friend, or making a dig that she wasn’t putting him first? She shook her head. It was too hard to fathom. Wishing him a quick farewell, she hung up the phone then scrolled through for Kim’s number.

“Hello, stranger.” Kim answered the phone on the second ring.

“Hi, Kim. I’m so sorry I haven’t called sooner. The Carnival was manic.” She hesitated, unsure what to say about Conor. Before she could decide whether to mention it or not, Kim started talking again.

“It’s alright for some. I’d give anything to get back to work. I’m still waiting for the doctor to say I’m fit.” She gave an irate snort and Claire felt her heart sink into her stomach. The happy Kim she had spoken to a week before seemed to have vanished again.

“I’m sure it won’t be long,” she said in a soothing voice, wary of annoying Kim further. “Is Helena home yet?”

“Oh yes. The prodigal daughter returned this weekend, proudly displaying her bump.” Kim cackled and Claire thought the sound didn’t suit her. She didn’t like to hear her friend being nasty, even about her sister.

I guess it’s no different than how I feel about Robert.

“So she is pregnant then. How do you feel about that?”

“Sodding angry, to be honest. I lose my baby and get told I can’t have another one, and my sister gets up the duff with some bloke she barely knows. At least she’s decided to keep it. I don’t think I could stand it if she’d had a termination, whoever the fella is.”

The pain in Claire’s head stabbed sharper. She wanted to empathise with Kim, but what did she know of babies and wanting to become a mother? She wasn’t even sure she wanted to be a girlfriend, never mind anything else. And the bitter jealousy in Kim’s voice was hard to take, however much she knew and sympathised with the cause.

“Do you still want me to come and visit?” Claire held her breath, hoping for an answer in the negative.

“Good God, yes. Come and save me from her sanctimonious preaching, please.”

Claire inhaled silently and deeply, and then had a brainwave. “Why don’t you both come down here? I’m in a charming hostel, five minutes from the beach, and the forecast for the weekend is gorgeous.” She hesitated, then plunged on. “And you can come hang out with my new man, if you like.” If Conor came to stay, she wouldn’t have to share a room with Kim and Helena.

“Claire, you old dog, you’ve been keeping secrets. Is that the real reason you’ve abandoned me. Come on, spill the beans. Who is it? Is it your boss? It is, isn’t it. You’re shagging the boss. Ha ha that’s priceless.”

Claire winced at Kim’s tone. “Yes, it’s Conor. If that’s how you feel, though, I don’t think it’s a good idea for us to stay all in the same place. It’s not like we work in the same office or anything, so it’s not how you make it sound.”

“Oh get off your high horse, you muppet. If you like him then good on you. From what I can remember he was pretty dishy. Mind you, that might have been the drugs.” She laughed. “I’ll have a chat with Helena, but I’m sure she’ll agree. Anything to get away from Mum’s fussing.”

As Claire hung up the phone she wondered if it was too late to get a flight to the Maldives before the weekend.