I think I should have probably called this month’s posts the Summer Loomband Challenge or something, as there hasn’t been all that much in the way of art so far this August. Instead there have been far too many I’m-sadly-obsessed loom-band creations.

Today’s efforts were a labour of love, especially the second one, on the left, as each purse took over 1500 bands and at least five hours of repetitive looming.

Although the design is deceptively simple, and needs only a single loom, I still managed to get into a pickle with both when it came to casting off, and at least half an hour was spent sweating and cursing as I grabbed at disappearing bands with a blunt hook.

I must also credit the tutorial video, made by a young and confident girl from Craft Life who talked through the details. It is no fault of hers that my flaps curl and there are several holes and emergency knotted bands. The link to the tutorial is here.

I do miss my pets, though, so I think I’ll go back to my four-legged friends. Another dragon maybe, or a zebra or guinea pig. Hubbie asked if I was going to unravel some of my creations or buy more bands. Hmmmm. Well, the bands aren’t much use once they’ve been modelled, so new bands it is! 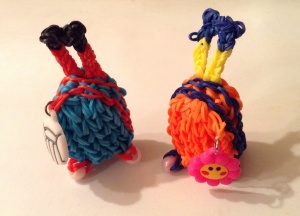 It’s the weekend, and the kids were up at 5.30am. It was my turn for a lie in, so I hid in my room and made loom-band luggage while hubbie entertained the children for a couple of hours.

I am definitely obsessed. I’ve started seeing loom patterns in my mind while stacking the dishwasher or tidying the playroom, and I sat making mini roses while the kids had their bath. I then spent the entire evening making the beginnings of a loomband purse. Obsessed isn’t the word.

Apologies to anyone following these posts who is sick of loombands by now! I’ll try and do something more traditionally artistic soon… 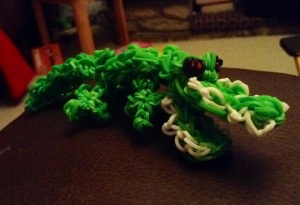 I had intended to have something other than clay and loomband creations to show off today, but as I’ve been in bed poorly all weekend this is all I have.

I probably shouldn’t have done these, even, as the eye strain is possibly contributing to my general feeling of dizzy malaise, but I need something to stay sane. There is only so much Commonwealth Boxing and episodes of Flog it! you can watch!

So, I introduce loomband Alligator and loomband Giraffe. Both come courtesy of DIYMommy instruction videos on YouTube. 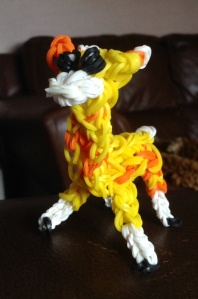 My daughter requested the giraffe and helped me with some of the prep but really the 3D pets are a little hard for her concentration levels (or should I say for my patience levels – trying to teach a five-year-old to listen and follow a 45 minute tutorial is beyond my skill!)

The Alligator is the hardest thing I’ve made so far, involving much cursing, especially as it turns out the green bands I have are weak and prone to snapping (no pun intended).

Still, I am growing rather fond of my loomband pets (I have a purple bunny which is probably my favourite to date.) Hubbie thinks I might need counselling for my addiction…

This post is part of the Art in August challenge on the Laptop on the Ironing Board blog. 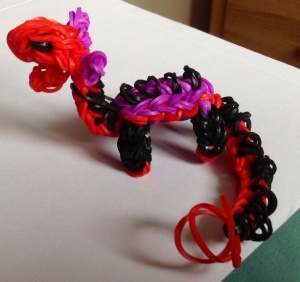 My first artistic endeavour in August had to be a loom-band creation. I have taken to the new craze like a hormonal woman to wine and chocolate. I particularly love the 3D creations and today I have made a bunny, two monkeys and a dragon.

Of course, for obvious reasons, the dragon is my favourite. I made it using this YouTube tutorial. I might have to figure out how to give it proper wings, and then I can do one in each set of colours for the cast of Dragon Wraiths.

This post is part of the Art in August challenge, as described on the Laptop on the Ironing Board blog.

P.S. There is a Giveaway going live on Goodreads this morning, to win a paperback copy of Class Act. If you haven’t read it (or you have but fancy a paperback version) do register your interest. Available in US, UK, Australia and Canada (but will ship to any country where it is available on Amazon!)