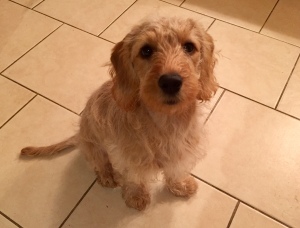 It’s 4am and the puppy just woke up. She’s crying and I know that a) she needs a wee and b) if I don’t go soon not only will I have extra laundry, but she will have woken up the kids.

That’s fine. Parenting is about getting up in the night. The problem is I also know I won’t make it back to bed. Because once she’s done her business, she won’t go back in her crate without protest. And by protest I mean yelping, crying and rattling at the gate until it sounds like armageddon.

We’re on dog two. We know the rules. Ignore them when they cry and they stop. And we did. A bit. She goes in her crate at bedtime without crying now. But the mornings are different.

Firstly, I’m not so great at 4am. I go from calm to banshee really quickly. When I threatened (in hyperbole I hasten to add) to drown or sell her, I knew it wasn’t working. That whine, man, it’s like a chainsaw to the nerves pre-dawn.

Secondly, I’m not the only one who becomes vile on too little sleep. A couple of weeks ago I left the puppy crying and took off to the outside room, where I couldn’t hear her. I slept beautifully for a couple more hours, but awoke to carnage. The whole house was up, poo everywhere, tempers frayed. It took days for husband and kids to recover.

It was the same when my youngest child was born. My eldest was a light sleeper then, and only 19 months old, so whenever the baby cried he was instantly hushed. I spent the next five years dealing with the consequences. Even now I wonder if I caused his separation anxiety by trying to protect the family’s sleep/sanity.

And there’s the rub. At 4am, when I’m taking one for the team, I’m also telling myself what a terrible parent/dog owner I am. Creating a needy, spoilt puppy whilst also creating a grumpy exhausted me.

My only salvation is something a therapist said to me once. I wasn’t there for parenting advice, but it was the only good thing about the whole experience, since they did more harm than good for the thing I was there for. Anyway, the advice was ‘Dependence before Independence’. A child has to learn to trust you before they can leave you. A child has to know you’ll be there no matter what.

That phrase has been our parenting mantra. For every 3am cuddle, for every event left early or extra five minutes spent saying goodbye. It helped me too, because nothing triggers my anxiety like having a screaming child dragged from my arms, no matter how well-intentioned. I’ve had stern words with teachers and left childcare institutions that insisted my child was crying ‘crocodile tears’. I believed in my mantra.

And it’s worked, with the kids. My timid frightened children are now pulling away, finding their wings, choosing to forge their own path, without being shoved. They go on camp and sleepovers and run happily into school without a backward glance. And my sanity has remained intact.

Time will tell if it holds true for puppies.