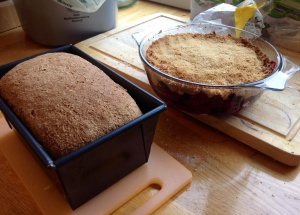 What is it about us humans that we do crazy things under the delusion that they’re a good idea? I woke up yesterday full of cold (again!) and this weekend should have been about survival. Instead I took my son shopping yesterday to buy my daughter’s birthday gift. Two hours of wandering around shops looking for bedding, with a three-year-old in tow, isn’t that clever.

I did at least take a lie-in this morning, after writing my blog post, and didn’t get up until 10am. But then, instead of sitting in a corner quietly reading my book while the kids played (as suggested by hubbie) I started on a baking spree.

I don’t do baking or cooking, unless I want cookies and there aren’t any in the house. I’m the only person I know who isn’t a foodie, doesn’t enjoy cooking and hates making everything from scratch. But, today I made macaroni cheese, fruit crumble and a loaf of bread, all from scratch. What the…?

Actually, there is some logic. Firstly, although the kids were playing nicely by themselves, I knew that would end abruptly if I sat on the sofa with a book. If Mummy’s busy they can mostly be relied on to do things they think I might not approve of. I watch them surreptitiously to make sure it’s nothing dangerous, and everyone is happy. 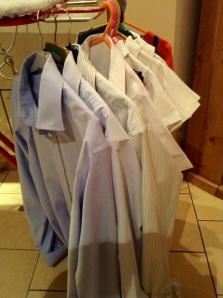 Secondly, it’s ‘that time of the month’ and comfort food was required. A nice broccoli and cheese pasta bake and some fruit crumble and custard was just what the doctor ordered (well, probably not, but you know what I mean!) I managed to make a hash of mixing powdered custard, ending up with a lumpy goo twice, but it tasted okay.

Thirdly, I bought a new loaf tin a few weeks ago and I haven’t really had a chance to try it out. I made banana bread in it, but think I got the recipe wrong because it didn’t rise (although it tasted okay!) I searched and searched online for an easy wholemeal bread recipe, for my basic cupboard of ingredients, and found one on Delia’s site. Delia is one of the UK cooking gurus, so I thought what can go wrong?

The recipe certainly is easy, requiring no kneading and only a few basic ingredients (flour, salt, sugar, yeast, hot water). It rose as she said it would, to fill the tin, and baked to perfection, sounding lovely and hollow. It looked lovely, smelt great. But it feels like a house brick. Tastes like one, too.

It’s just about edible toasted, but it’s sooooo heavy. It’s just as well I managed to buy a loaf at the supermarket this afternoon, because I can’t see the kids eating it in their packed lunches tomorrow (I’ve got to make them all week, because I forgot to order my daughter’s hot dinners. Idiot!) 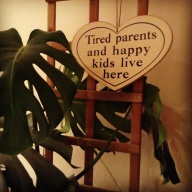 So my search for the perfect easy bread recipe continues! My sister swears by a no-knead one that cooks for hours (or sits for hours, I can’t remember) but I’m not very patient. And, actually, I’m happy to do a bit of kneading if it means light and fluffy bread!

To top off my day of domesticity, I did ninety minutes of ironing while the kids played outside in the rain and then picked away at their tea. It’s a nice feeling to know it’s all done, but my head is fit to burst now (especially as they’re watching Barney for the tenth time in two days and that singing goes straight through me!).

Thankfully hubbie did bath time, although that seems to have finished him off (he also has a cold!) What a pair we are.

Roll on spring and feeling well again. And thank goodness it’s bedtime (for the kids and probably for me, too!) How was your weekend?