Jolly Joules, part of the Living Nativity at the Farm

I love Christmas. It’s my favourite time of year. I love buying presents, wrapping them and putting them under the tree. I love decorating the tree, and Christmas lights and tinsel.

In the past I’ve made wreaths from scratch with fir-tree branches and pine cones. I’ve hand made Christmas cards and sent them to dozens of people with individual messages in each one. I agonise over gifts to get the perfect present and don’t really have anything I want for myself. Hubbie’s never been a great fan of the season, but Christmas is me to the very core.

Then I had my daughter, and the magic continued. I dressed my daughter up in a Mrs Christmas outfit, aged 10 months, and she was adorable. I made Christmas sacks and Christmas cards with hand and feet prints on them. Magical. 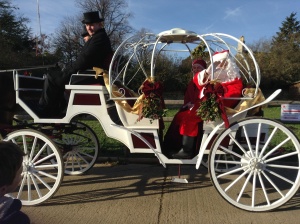 I had my son. And that Christmas was special too, if slightly stressful, as we hosted 13 to dinner in our barely finished kitchen. But my son was only three months old, and poorly, so I did very little on Christmas Day but make little felt stars and sit in the corner breastfeeding, surrounded by family. Gorgeous.

It all went down hill from there. The children started noticing Christmas. The pressure to get the perfect presents, to make it magical for them, too, increased. And my time diminished. I no longer had endless head-space to plan presents, or endless evenings to sew and make. My temper got shorter and my nerves tighter. Christmas started too early and went on too long.

This year has been the worst so far. It’s not even December for another few hours, and already I’ve turned into Scrooge. I’m trying, I really am. We went to see Father Christmas arrive at the farm today, as he pulled up in his white carriage drawn by shire horses, accompanied by Mrs Christmas. It should have been great. But his cushion had slipped and he didn’t say hello to my son, which made him sad.

And the lies had to start. “Why can’t we see him and get a gift today, Mummy?” “Because it’s too early, because it’s busy, because, because…” The real reason is the Farm have two men playing Father Christmas, and we’ve always seen the other one, who I used to do Panto with when I was a teenager. He’s fab. He makes Christmas for us. But he doesn’t start until the 16th, and now my daughter’s at school that means we won’t see him until 21st December. That’s a long way off.

The lies are the hardest part of Christmas. You have to be alert to lie consistently and with conviction. I’m rubbish at it. And my children are smart. I’m trying to create the magic, but it doesn’t come with a handbook, and quite frankly I miss being able to get ready for Christmas in my own little magical bubble.

I can’t even share the pain with the hubbie, because obviously some of the gifts are for him, and surprising him is one of the few joys left. Because the other problem is, my children are a bit spoilt. Yes, I know; my fault. When my daughter got her bike, two years ago, she said, “Where’s the bell?”

She gets it from me. Because I want Christmas to be perfect, I do have a tendency to be a bit ungrateful when I get an utterly random gift that I think is a waste of money. I try to hide it, but did I mention I’m rubbish at lying? It’s a minefield.

Oh, and money, there’s the other stress this year. I dreamed I got caught shop lifting last night, and I think it was my psyche telling me that might be the last resort (joke!). It’s not that we don’t have the money, but because I haven’t earned a penny this year, I don’t feel like it’s mine to spend. I’d have to sell a lot of books to buy even one gift! Not like in the days when I earned proper cash as a contractor!

Anyway, I’m getting my grumble and gripe out now, before December arrives (even though you’ll be reading this in a few hours, when it is December!) so hopefully I can work on the magic. Try and stress less, do less, and concentrate on getting through a whole hour with the children without wanting to scream.

I did manage to let them decorate the tree earlier, and only ‘tidied’ it up a little bit, removed some of the tinsel and added the lights. (It helped that I’m reading a good book, so I kept my head down and didn’t watch!)

Please tell me it gets easier, though? The lying at least.

“Leave him alone.” Claire’s voice whipped across the empty space, stopping Robert as he was about to follow after his son.

“I will not have a child of mine talk to me like that.” The urbane smile was gone, replaced by a dangerous red flush. “Two weeks with you and they’ve turned savage.” He pulled his arm free of the wide-eyed woman by his side, and once more turned to go.

“I said leave him!” Claire’s shout echoed off the white walls and glass doors. Robert turned slowly to face her, his eyes wild.

“Stay out of this, Claire. You’ve had nothing to do with the boys all their lives; don’t start playing Auntie now; it doesn’t suit you.”

“It suits me better than father suits you. When did you become such a monster, Robert? You were always a whiny child, but I don’t remember you being such a wanker.”

Jack sniggered behind her, and Claire flushed as she remembered there was still one of her nephews in the room. She looked over and gave him a rueful smile. “Jack, why don’t you go and see if your brother’s alright? I’m just going to have a chat with your dad.”

With a mischievous grin, Jack nodded and silently left the room. Claire noticed that he gave Gabriella a kind smile, and Claire wondered what the poor girl must make of her welcome. Judging from her bemused expression, Claire decided she probably didn’t speak very good English.

She dismissed her from her mind and turned her attention back to Robert. He stood with his hands on his hips, glaring at her, his chin jutting out pugnaciously. He looked ridiculous. Claire felt the anger drain away, taking all her vicious words with it.

“What possessed you to bring her here? As far as I can gather, the boys haven’t even met her yet, and you turn up two hours late to collect them and coolly announce you’re engaged. What planet are you on?”

“I don’t see how that’s any business of yours.”

“When you ask me to look after your children, while you’re off seducing a girl half your age, then you make it my business. Are you having a midlife crisis, is that it? A beautiful wife and two gorgeous boys not enough for you?”

“Francesca, beautiful? All this time alone living like a peasant has screwed with your brain. The woman’s a bitch. All she cares about are her vacuous friends and her spa treatments.”

Privately Claire couldn’t disagree. She didn’t know her sister-in-law that well, but from what she could remember of her at the wedding years before, she didn’t have many redeeming features.

“You married her, Robert. For better or worse. I was there.”

“Grow up, Claire. No one believes in that, ‘’Til death do us part’ crap anymore. I grew tired of her whining and her constant demands.”

“So you threw her over for a younger model, leaving your boys stuck in the middle. Very mature, Robert, very grown up.”

“I’m not going to take relationship advice from my harlot of a little sister, who can’t even keep a man for more than a few months.”

Claire reeled from his words as if they were a blow. With rapid breaths, she took three quick strides across the room and slapped his smug, arrogant, face as hard as she could. She smiled in satisfaction as his head snapped back, even as the numbness and pain shot up her arm.

“Get out, Robert. Now.” She pointed at the door, ignoring the throbbing in her wrist. “Go and leave the boys with me. You don’t deserve them.”

Robert felt his cheek with fingers, before looking up with hatred in his eyes. “Are you insane?”

“No, I’m not. I’m perfectly lucid. I will take the boys to Mum’s house and they can stay there until Francesca comes to collect them. Or they can transfer to a British school and come and stay with me in the holidays. Anything has to be better than having you hurt them any more with your towering indifference.”

She panted, as if she’d run up the cliff from the sea, but her mind felt clear. Knowing she would regret it in the morning, Claire stalked past her brother and went to find Jack and Alex.

“Boys, come and say goodbye to your father, he and Gabriella are leaving.”