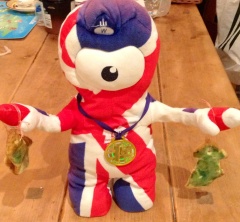 The next few days are surely about survival. How do you keep under fives from exploding with excitement in the run up to Christmas? Thank goodness term only ended on Friday, leaving a handful of days to get through endless repetitions of  “is it Christmas yet?” and “can we hang our stockings?”

Luckily Daddy took the little darlings shopping for Mummy’s Christmas Gift this morning (socks, socks and more socks, hurrah!) so I was able to finish my Father Christmas duties, clean the house, walk the dog and try to write some more adventures for Claire.

I lost an hour of precious time trying to find a building on Rightmove that fitted my mental image of what Timothy’s activity centre should look like. I love shopping for £3 million properties on the Cornish coast. In the end I had to use a blend of three different places. Fun though.

Unfortunately a shopping centre on the Sunday before Christmas is not the place to wear out small children (I suspect they could barely even move) so the kids were bouncing off the walls by 2 o’clock.

Despite my hacking cough and permanent need to sleep I just about managed to dredge up enough energy to get the kids baking Christmas biscuits. It was a shame my cupboards were mostly bare and I only managed to scrape together enough ingredients for a handful of tiny morsels.

I’d really like to have a go at making the little stained glass biscuits I keep seeing around (and that happen to be in my cookery book) but I had no plain flour, boiled sweets or brown sugar. Slight problem.

But we did manage to locate eggs, icing sugar and vanilla essence, and voila! They’ll look better on the tree than they do hanging from the hands of Wenlock, but they weren’t bad for a first effort. Of course if I ask my children to mix colours, I inevitably end up with black, so they’re more suited to Hallowe’en than Christmas. The thing I like about these biscuits, though, is that you decorate them before you bake them, by adding food colouring to egg yolk. No need to wait for them to cook and cool down before icing them. Lord knows how you get intricate patterns like in the picture, though. Ours were mostly solid blocks of green! Still, it filled an hour.

Thankfully they’re finally in bed. Any tips for keeping the mania under control for the next forty-eight hours will be gratefully received! 🙂

Claire stared at the green and white livery of the coffee shop sign and let the familiarity enfold her like a blanket. She sipped at her tepid latte and tried not to think. Her eyes ached, and her skin was tight from salt and lack of sleep.

Against her will, images of the night in Cobh, and the long the flight home, played on loop, until she felt she might go crazy. The tension had been unbearable. There hadn’t been space for words. Her pain at Conor’s deceit – not his marriage so much as his method of telling her – clashed against his sense of betrayal at her considering another job.

She had no more understood his shock than he had her sense of humiliation. Despite repeated efforts to talk it through, they had been unable to find common ground. It was as if, somewhere between Claire stalking from the Baptism and Conor coming to find her in the hotel bar, they had become strangers.

They’d said farewell at the airport without touching and Claire wondered if that was the end. All the while her heart asked the unanswerable question: was it really so important to strike out on her own, to start a new life in Cornwall, rather than putting down roots working for Conor?

She could probably forgive his stupidity, letting his little sister fill her in on his history. But would he ever accept a long distance romance, especially after his wife moved across the Atlantic with his unborn child?

For a moment the need to comfort his decade-old hurt overwhelmed her and she reached for her phone. Then his stubborn anger at her conversation with Maggie played loud in her ears and she stopped.

Damn him! I told him I wasn’t going back. He accepted it. Did he think he could change my mind? What, that love conquers all? I’ve known him three months; we’ve been dating for three weeks. Yes he’s charming, but…

“Stop it,” she muttered out loud and blushed as the woman at the next table gave her an odd look.

Why can’t life be simple for once?

She drained the last of her cold coffee with a grimace and pulled out her phone. Her heart was in her mouth as she waited for the call to connect.

“Maggie, it’s Claire. Next time you speak to your friend Timothy, tell him I’m in.”

Guilt swirled around inside Claire like whiskey in her stomach. Even driving across Cornwall to the activity centre to meet Maggie’s friend Timothy felt like a betrayal. No matter how many times she reminded herself that she had no obligation to Conor past the end of the three-month contract, she knew how hard he had fought to get the role for her. And how essential it had been to know she had a job to return to, after leaving the darkness of her New Zealand journey behind.

And is this how I repay his efforts? Running away at the first opportunity; abandoning him to the censure of his peers. Regardless of our relationship, if such a thing still exists, I owe him more than this.

She knew the words were true, but another, quieter, voice said, Working for others got you nowhere. You need to do something for yourself.

Still, she felt beyond selfish, and wasn’t surprised that Conor hadn’t tried to get in touch since their arrival back from Ireland two days before.

As she followed the directions of the SatNav, every junction caused her to hesitate. She could turn round, go someplace different. Stay in a hostel, work on the report. It wasn’t too late to choose Conor. Every cross roads felt like a waypoint in her life. Before long she felt exhausted.