Why my first attempt at a children’s novel is about pirates and dinosaurs!

Brrr. As I write this, I am walking around a muddy ploughed field in completely inappropriate footwear (sandals because it’s still summer, right?) racing the rain clouds back home: I’m wet already as we’ve been swimming but I don’t really want the dog muddy and wet.

As is my habit, I’ve been searching my mind for today’s blog topic. It usually comes to me before I let the dog off the lead, giving me twenty minutes of walking and texting to get it written.

Today, instead, my head is full of projects (oh and now my ankle full of nettle venom, ouch. Texting and walking can be bad for your health)

This morning I signed up to an online course on writing children’s stories. I had to get my husband’s permission not because of the cost but because of the time. I’m not allowed to start the course until January. Because he had to take the children from 7am until 1pm today (it was bliss) so I could write yesterday’s post and get a tricky scene rewrite from Baby Blues out of my head. 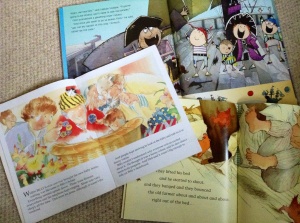 The kind of illustrations I’d love to do!

I miss having my nursery days together: having one day to spend on editing followed by two or three days’ break in between is a nightmare because I only just about get going when it’s time to pick up the kids.

The problem today was that I worked until 1pm and then I didn’t want to stop. Not only have I got extra changes I want/need to make to Baby Blues draggng at my mind, I’ve got a dozen other projects clamouring for attention. I’m not really a completer finisher more a start and move on sort of person! Some projects I’ve managed to avoid starting, such as my overwhelming desire to try my hand at writing a children’s book.

Well today I gave into that desire, after reading to the kids for twenty minutes.

My attempt at illustrations

I’ve always wanted to see if I could write and illustrate something, although I’m pretty certain my current artistic skills are not of the children’s illustrator variety. Still, these things fill your mind when you read Tim, Ted and the Pirates for the hundredth time.

The project in my head isn’t there because I want to try and break into the picture-book market so much as because I want to write something for my children. I’ve had an idea floating in my head for ages, and I thought it wouldn’t be too hard to write it down. So I tried. Oh dear. Let’s just say I’m looking forward to starting my Writing Children’s Stories course in January.

And – If you’re based in the UK – the course was £12 on Groupon or I never would have bought it. I’ve got a bad track record with online study courses that don’t have deadlines. It’s hard to motivate yourself to work on something if nothing is driving you forwards. In this instance, it’s just as well that it’s an unrestricted course, as I can’t start for another five months! 🙂

Still, I know what next year’s blog is likely to be all about. You have been warned! Hee hee

Claire stared wide-eyed as the Māori dancers thumped their feet and waggled their tongues. It was her first taste of aboriginal New Zealand and it was something to behold. From the moment the coach had collected them from the hostel they had been immersed in Māori culture. She glanced over at Neal, who had been appointed Chief of their group by general consent. From the way he stood absorbed in the ceremony, with his head high and his chest thrown out, it was clear he’d fully inhabited the role.

At least it takes his attention off me.

Claire had refused to give up her position at the front of the bus, but her profile among the other travellers had risen since the Shweeb challenge. Dealing with mostly good-natured ribbing wasn’t beyond her skills, but she had preferred her lonely anonymity.

The Māori warriors in front of them gathered to perform a haka challenge. Claire had only seen the haka on the TV before, at the beginning of the rugby matches she had endured to please Michael. The performance was much more powerful when the ground vibrated with every stomp and it was possible to look into the fearsome eyes made alien by dark tattoos.

Eventually something was laid at Neal’s feet. A peace offering, from what she could remember of the information they were given on the bus. Neal picked up the token and the atmosphere shifted, as the Māori people welcomed them into their village.

A high, long note sounded, raising the hairs on Claire’s neck. She searched for the source of the noise and saw someone blowing into a conch shell. As if waiting only for the signal, the women began an echoing call that resonated across the surrounding forest.

Claire shivered and wrapped her arms around herself, as the hairs continued to rise across her skin. She wished she’d thought to bring a jacket.

Before she could protest, Neal was behind her, enclosing her in a bear hug. He radiated heat and Claire was soon able to push him away and admit, truthfully, that she was no longer cold. No need to tell him that the shivering had increased with his contact.

“This doesn’t count as dinner, by the way,” Neal said with a sly grin, as he dropped his arms in response to her shove. “You still owe me.”

Claire nodded and walked away without speaking, attempting to lose herself in the details of the village. She wandered through the various dwellings as if it were a living museum, taking pictures for the blog and mentally filing notes to write about later. Her mind cast back to some of the places she visited in the UK; the plague village, the Victorian town.

No wonder people would rather come here. Although some of these excursions are a bit pricey. At least I wandered around Eyam for free.

Claire’s tummy gurgled loudly and she blushed, thankful that the music from the stage mostly drowned it out. Neal, sat three seats over on her right, turned round and smirked at her and her blush deepened.

Claire wrenched her gaze back to the performance, watching the semi-clad men and women perform intricate dances that seemed to involve much thrusting of the hips and tongue. Although not overtly sexual, it made her skin hot and she was acutely conscious of Neal’s presence, despite the people sitting between them.

Glad when the performance was over, Claire gratefully followed the others to find the hangi food they had helped raise earlier from the pit. Tantalising smells of smoked meat and vegetables drifted on the evening breeze and she felt the saliva pool in her mouth.

She hesitated as the guests found their seats. She didn’t want to end up next to Neal but she couldn’t see him anywhere in the room. Not wanting to look like an idiot, at last she took a seat in the far corner and prayed he wouldn’t see her.

Why am I avoiding him? I have to take him out to dinner tomorrow, more fool me.

Claire pondered whether it was worth staying an extra night in Rotorua just to shake him off. She had a horrible feeling that he would stay too, just to torment her.

As if voicing her thoughts, the words cut through Claire’s reverie. Her heart plummeted at the sound of the too-familiar voice drawling behind her.

“Hiding in the corner isn’t going to put me off. I will have my wicked way with you.” His voice was jocular but the words cut directly through to Claire’s groin. Right then she would have followed him to the nearest bed. Sense fought with lust and sense won a temporary victory.

“You can try,” she spat at him. “I’m not yours for the taking. I’m not some gullible teenager. I don’t know why you don’t turn your attention where it’s wanted.” She ripped at some bread with her teeth.

“Oh, please. Those children? I’m old enough to be their father. Besides, where’s the fun in easy game. Like shooting fish in a barrel. Although I’ve never understood that phrase. Why would you shoot fish?”

He selected some food and chewed thoughtfully, as if they were engaging in normal dinner conversation.

Claire felt torn between following his lead and maintaining her icy silence. She realised she didn’t know anyone else at her table and it was Neal or nothing. Even as she resolved to speak to him, she realised she had nothing to say.

Have I lost the art of small talk? Have I been on the road so long I don’t know how to speak to people anymore?

She thought of all the things that weren’t to be talked of. Her sister’s illness, Michael’s blind infatuation, Kim’s anger, Josh; The jobs she didn’t want. Her family’s rejection on her last visit home.

No wonder I can’t do small talk. My life’s a wreck. Even here, on the other side of the world, I can’t get it right.

Claire stared at her plate and fought back tears.