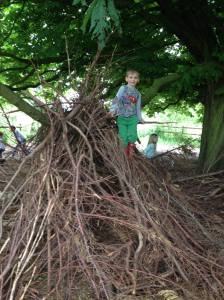 King of the Dens

Yesterday we spent the day with friends of ours at a local farm (West Lodge Rural Centre). We haven’t been to that one for a while, as it’s a bit further out, and I’d forgotten how nice it was. To the extent that I bought an annual pass.

To me, spending the day there is like giving the kids the childhood I had, without the risk or judgement.

The kids spent the day riding the barrel train and the ponies, feeding the ducks and goats, making dens and friends, and cuddling the bunnies.

They even got to watch a sheep lose its winter coat. Not sure I’d be that impressed if it were me. It was freezing!

Despite the weather feeling more like March than June, it was a fab day out.

It’s weird watching the kids from a distance as they get scratched by tree branches or squabble over ride-on tractors. I try so hard not to be a helicopter parent, but I am one by nature.

At the same time I’m a bit lazy. The two work okay together now they’re older. I watch them constantly, but from a distance, preferably with a book and a cuppa, and I only intervene when I foresee blood or scarring.

And it’s great to see them make friends. My daughter had an impromptu gym class with a young girl she befriended, and they practised handstands and cartwheels on the grass for ages, while her big sister built dens with the boys.

That’s the only fly in the ointment of a fab day out. 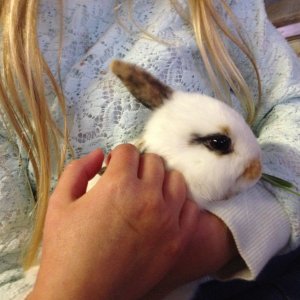 My friend has two boys and, while my daughter is just as capable of doing everything they do – with bells on – she doesn’t love the rough play. So she does end up feeling left out.

How do you parent it? She’s been taught to be careful with her baby brother, and also knows her brother gets yelled at for being too rough. But when they’re with a family that’s all boys – where they’re used to bundling and wrestling – where do you draw the line?

I have no idea, and it ended in a few tears and dramatic exits. It wouldn’t be a normal day without them, I guess, but it took the gloss off.

Seven is such a touchy age.

And it didn’t help when we all fell in love with the cute baby bunnies in the cuddle corner. I had rabbits and guinea pigs when I was younger, and love them so much. But hutch pets don’t really fit with our lifestyle, so the answer to ‘pleeeeease can we?’ was still no!