I’m writing against the clock for today’s post. I normally draft the night before but last night, by the time the kids were finally in bed, I just about had the energy to crawl onto the sofa and not move until bedtime. Just as well, as I had a small child trying to elbow me out of bed for most of the night. I’ve had enough of ill to last a whole year!

It was a good day yesterday, just very tiring. We went to the Farm with a family who don’t go very often so were there for nearly five hours. The kids got to hold week-old chicks and have a go on the new didicars (which look fab – husband and I must have a go when it isn’t half term! Must teach the kids to propel them by wiggling…). Then home for quiet time and tea before our usual Friday night visit to my parents. Hubbie took the kids out to walk the dog so I could clean the house and little man cried all the way round after falling in a muddy puddle. It’s tough being two. 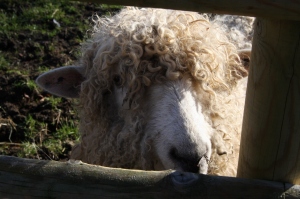 On a happy note two of my photographs won in the Farm’s Winter Photography competition, meaning we get a free annual pass (very helpful in this time of too much unemployment in our house!) We might have won due to the lack of entrants (most of the photos were either mine or my daughter’s) but a win is a win! I wouldn’t have selected the image they did as the best (it hurt me not to be able to digitally manipulate it as I do all my images – I love adobe photoshop) but apparently they chose it because of the depth of the puddle Aaron is standing in! I love that my picture of Humby Keith the Lincoln Longwool Ram was also a winner. He’s my favourite animal at the Farm just now.

The weirdest part of yesterday was my friend telling me her Mother has to have a biopsy, after writing yesterday’s post about Claire’s sister. It always freaks me out a bit when life mirrors art even in an unrelated way. It reminds me also of the responsibility to write sensitively about tough topics and make sure I do my research and get it as right as possible.

Claire gazed out over the water and let her thoughts drift away with the wake flowing behind the launch. She had intended to leave Bowness after her coffee but her sister’s phone call had driven all rational thought from her mind.

Besides, they have a Costa and I didn’t see it before I had that awful latte in the other place. I’m not leaving town until I’ve had a decent coffee.

Claire smiled at the irrelevancy. Coffee has never featured so heavily in my life as it has on this ridiculous journey. It seemed to represent some notion of urban civilisation that was essential to her being. The boat trip was a way to kill an hour or two before she could have more caffeine.

Turning her face into the wind Claire let the icy breeze drive out more important thoughts. She hoped the lap of the water would drown out the words echoing around her head but it only muted them and muddled them together.

Wasn’t that what I wanted her to do?

The words, sharp and metallic, tore through the peace of the lake. Claire no longer saw muted shades of green and brown, glints of faint sunlight on the water, space and calm and beauty. No longer heard the lonely cry of the birds or the splash of the lake against the boat’s hull. Instead she saw the tones and hues of her pristine apartment. The sharp angles of her office. Heard the click-clack of her heels and the tip-tap of her keyboard. Her perfect world. What was there not to covet?

Claire inhaled, filling her lungs with unpolluted air. Her brain felt foggy and full, like a hangover of the worst proportions. Wrenching her gaze away from a view that only seemed to drag her into a well of introspection, Claire looked around the boat at the other passengers. She had assumed it would be empty at this time of year but the seats were crammed with huddling people, snuggling together against the icy wind. A quick survey confirmed something Claire didn’t want to acknowledge.

The people came in two by two, hurrah hurrah.

With a sigh Claire turned her face back to the Lake and waited for the boat trip to end.