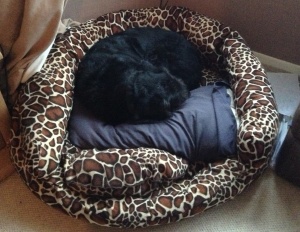 I want to be a dog

Today I envied my dog. She spent most of a rainy morning curled up in her bed or laid out on the sofa. The kids fed her biscuits and she even got her walk when hubbie got home. But mostly she slept, unmolested and alone.

I envied her because I am sick. Again. I’m not even sure I actually got over the last cold; they seem to have merged into one long month of misery.

After getting up and putting two bowls of dry cereal on the sofa and Cbeebies on the TV I crawled back to bed and tried to stay there. It lasted until hubbie left for work, when the calls of “Mummy, Mummy, Mummy!” came up the stairs.

When that failed, the thunderous sound of approaching children thumped up the stairs in time with my headache, followed by voices too loud and too high, and hugs too short and demanding.

I got up, showered and struggled downstairs, only for them to disappear off to play happily by themselves for half an hour. Kids! It’s been like that all day. Like vultures circling a dying animal, the children seem to know when I’m at my weakest and dive in with claw and beak. They squabbled and fought, over toys, over me. They were mean to each other, provoking tantrums left and right. Such a change from my gold star Mummy day yesterday.

The worst part? Apart from opening my Class Act manuscript and realising it’s a pile of poo? The worst part is they go back to school/nursery tomorrow. My first day alone in nearly three weeks and I’m sick. Not even sure how I’ll manage the school run. Sigh. Never mind. As always in the blog universe, there are plenty of other Mummies sharing my pain. My favourite two posts from today are these: 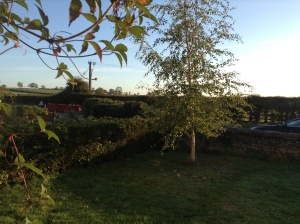 One of the amazing things about being a writer, whether you pen children’s books or dark, creepy horror stories, is that you are the best source of information for your stories.

Lying in bed this morning, it was easy to imagine that I had been abducted by aliens. My body, heavy and unresponsive, sank deep into the bed as if I had been drugged or – like Leah, in Dragons Wraiths – as if I had no body at all, but was merely a collection of thoughts held together by habit. My head felt muffled and a whole section of my brain, somewhere above my aching eye sockets, felt as if it had been removed or filled with thought-numbing drugs.

I could imagine a powerful wizard suppressing my magical ability, ensuring I was incapable of drawing my will together to fight. The thoughts themselves ran scattered through my head, as if they were in the wrong brain and were seeking a way out. I couldn’t pull them into any kind of order: even thinking about writing this post became a feat too far. My throat burned, as if I had been yelling for days for someone to rescue me, or screaming into the darkness for salvation. 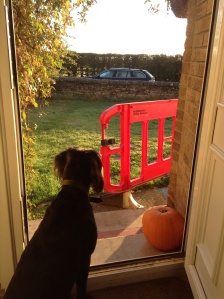 And what’s wrong with me? I have a cold. I’ve spent a couple of days fighting with the kids, my throat is inflamed from the virus and from shouting. I went for drinks with friends last night because I organised it and therefore couldn’t wimp out and go to bed. Even with only imbibing water and coffee I feel like I drank through the entire contents of the bar. A few extra hours of talking and not falling asleep on the sofa at 8 pm and I’m a wreck. My body, which hurts like I’ve run the Boston Marathon or fled from zombies, is actually only aching from fighting off a teeny tiny germ.

Right now I could imagine any fight or flight scenario and write the physical implications of it with a little bit of imagination. Well, I could, if there was any hope of gathering my thoughts into coherent sentences. Even this post is only half as effective as the one I dragged into being in my beleaguered brain half an hour ago. By the time I had escaped the warm cocoon of my bed and rolled my broken body out into the cold room to stagger down the stairs the thoughts had evaporated like mist. The slightly hallucinogenic feeling remains, as if someone else is controlling my body and staring out through my bleary eyes. If only I could capture all these feelings and save them for later! I guess that’s what writer’s notebooks (or daily blogs!) are for.

So, next time you’re struggling to bring realism to your stories, listen to your body. Especially your sick, hungover, stressed, exhausted body. It can give you all the details you could want and more. If only you can write them down!

Claire pushed the chocolate cake around her plate with the fork. It looked delicious, but she couldn’t face eating it. She couldn’t remember the last time she’d sat down to a three course meal and was surprised to find her ability to eat and eat had vanished.

“Not hungry?” Conor’s voice cut through her reverie. “I thought women had a separate stomach for dessert?”

Claire laughed. “Yes, normally. I guess I’m out of practice. There isn’t much call for fine dining when you travel by yourself.”

“I wouldn’t know.” Conor’s face became thoughtful. “I’ve never been anywhere by myself, unless for business, and then I usually eat with colleagues or clients.”

A memory trickled into the back of Claire’s mind. “Oh yes, didn’t you say you’d rather pull your teeth out than be alone?”

Conor’s eyebrows flew up into his sandy curls. “Impressive. I probably said it makes my teeth ache, but close enough. That’s why you’re so good, Miss Carleton, you’re as sharp as a tack.”

The look in Conor’s eye made Claire flush and she hid her reaction by taking a drink of her wine. The alcohol warmed her as it ran down into her body, and she had to remind herself she had a long and tricky drive back to the hostel. It wouldn’t do to be tipsy.

Her boss shook his head. “No. I don’t really do holidays. Not since the family used to come to Dorset every year, when I was a kid. My job is one long holiday. I don’t really feel the need to sit on a beach to relax.”

“There are other kinds of holiday!” Claire thought about all the activities she’d done in the last few months. Then she recalled that, before beginning her assignment, beach holidays had been the only type of vacation for her, too. “What do you do when you’re not working?”

Conor took a long drink of wine, then wrapped his hands around the glass and looked contemplatively into the dark liquid. “There isn’t much time when I’m not working, to be honest. But I guess I like to go to bars and listen to the bands. Go to the cinema, that kind of thing. What did you do, in Manchester, before your boss banished you to the back of beyond?”

It was Claire’s turn to ponder. “Much the same as you.” She thought about her trips with Michael, and wondered if Conor ever dated. Back at the interview she had taken him for a ladies’ man, but the more time she spent with him, the more that didn’t wash.

“There’s no significant other, then?” she found herself saying, keeping her face on her plate and the patterns she had made with the ice cream.

“Oh, plenty of those, darling, don’t you worry.” His voice took on the brash Irish lilt she remembered from before and she looked up at him in surprise. A flash of bitterness crossed his face, to be replaced with the cheeky charmer expression that he’d worn after the interview, when she’d vowed never to be one of his conquests.

Not that I need have bothered. He’s not made any effort to conquer me, that’s for certain. She swirled the wine in her glass. And that’s a good thing, of course. With him being my boss and all.

She watched as Conor drained his glass and refilled it from the bottle. His eyes had the sparkling glitter of someone heading towards half cut, and Claire became conscious of an urgent need to escape.