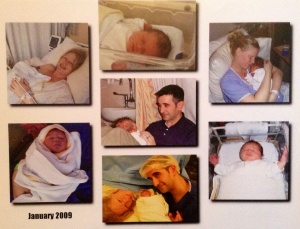 I’ve had several post ideas floating round my head today, as I rushed from place to place completing chores. Of course, now I’m curled up with my computer and the children are finally in bed, dinner cooked and eaten, dishes stacked, laundry done, dog walked, birthday tea party over and sick husband cared for, my mind is blank.

I should know, by now, to scribble the ideas down somewhere before they fly away. I seem to remember vaguely that one was about voice in writing, after listening to the fifteenth episode of Octonauts (a Cbeebies programme set under the sea) in the car, and loving all the different accents of the characters. Hmmm, don’t think I have the energy for that right now.

Another one was about the passing of time, as it’s my daughter’s fifth birthday today. This time five years ago, I was having an emergency c-section, after a 30-hour unproductive labour, delivering a baby three weeks before I planned to. Time is like the tardis: big and small at the same time. Every minute of every day of that five years felt looonnng, but whoosh, five years seems to have disappeared in the blink of an eye.

I’ve also spent much of the day fighting terrible broodiness. Maybe that’s also part of having your first born turn five. You face the idea of them growing up and think another baby is a good idea. I skipped a period last month (not unusual when I’m stressed) and I was more hopeful than horrified. When I finally came on today I actually felt sad. Despite the postnatal depression, the exhaustion, the shouting, the lost of self, the wondering how I can cope with two, the terrible labours, the increasingly early arrivals of said babies, the close friendship between my kids I wouldn’t want to break, the increased risk of health issues as I approach 40. Despite all those things, I felt sad. Damn you, hormones. 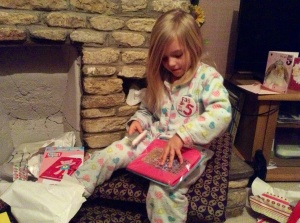 And whoosh, she’s all grown up!

Another topic that sits at the back of my mind is the way I have changed since I got married, with regards to chores round the house. When I lived on my own, I was quite capable of changing light bulbs, in the house and in the car, putting up a shelf, grouting the bath or painting and decorating. I even took the carbouretor off my car once, took it home in a bag for a friend to fix, before putting it back on. Me!

Since I got married, though, the household chores have been divided on gender lines. Hubbie does DIY and car, I do cooking and cleaning. But today, with hubbie sick in bed, I decided to change half a dozen light bulbs that have been annoying me for ages. It was liberating. Definitely a topic to explore, when my head isn’t aching fit to burst.

The final random thought I had today was about music. Listening to “Tracks of our years” on Radio 2 (with Ian Rankin this week – what a lovely guy he is, so inspiring) I was trying to figure out what tracks I would choose. Ten pieces of pop music that really mean something to me. It was tough. I didn’t get very far. It made me realise that your taste in music is pretty much fixed by the time you hit your twenties. And I wondered if that was true for books and reading too.

So many ideas. And, low and behold, I seem to have captured them all, more or less. I need to write some of them up into proper discussions. If I do, I’ll have my blog posts sorted for a whole week! Anyway, it’s definitely time for bed. Sorry for the random ramble. Hopefully I’ll find some inspiration before tomorrow! 🙂