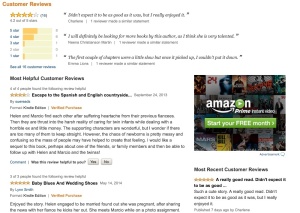 Septembers are shaping up to be crazy months for me. It doesn’t help that this is the second year in a row that hubbie has been between contracts in September, so added to the usual mayhem I have an extra child at home to feed and worry about 🙂

September marks the return to routine, but is exacerbated by a new school year – new lessons, homework, after school clubs, teachers, expectations – and the fact that my son’s birthday is three weeks in. Even though we opted for the easiest party ever this year, at a soft play centre, so no food prep, no painting giant sharks or making decorations, we still had invites, party bags and presents to sort, and sibling grief “when is it MY birthday?” to contend with.

I buy for all the family, as I know my son’s various requests best, so I have the added stress of sourcing gifts for grandparents and aunties. The party was a blast though – the first I’ve actually been able to enjoy – and he’s as happy with his toys as a four-year-old who watches too many TV adverts can ever be.

September is also my chance to return to writing. As I discussed in my previous post, that wasn’t as straight-forward as I’d hoped, after discovering my old manuscript was dire. I decided to stick with it but I’m more re-writing than revising, and the going is slow. Thankfully the story is coming together, with some help from my shelf of craft books. I don’t think it will hit my Christmas deadline but, as I’m hoping it will form part one of a trilogy, it’s more important to get it right than get it out.

That’s particularly the case after Class Act’s rubbish launch (I struggle to give it away!) To boost morale (and in the vain hope it might help Class Act sales) I ran a free promo for Baby Blues a couple of weeks ago. I had a whopping 8,000 downloads, mostly in the US. And while it didn’t result in as many residual sales as I’d hoped, It has led to some lovely reviews. I finally have enough reviews in the US to get the little snippets next to my rankings. I was disproportionately chuffed!

The final thing that’s made September crazy is my knitting obsession. I’ve moved on from cats to monkeys, at my son’s request. I can’t read patterns so I’m making things up as I go. It’s extremely liberating, after all that loom-banding when one tiny mistake resulted in a pile of bands instead of an amazing creation. The downside is, apparently, knitting gives me shocking RSI. My hands are numb, my wrists swollen and my arms sore. Gutted. To find a satisfying hobby away from the iPad, and then to have to keep stopping from pain is so frustrating. But I daren’t risk not being able to type!

Anyway, a rather prosaic update. I just wanted to say I’m still here, still alive, still plugging away, and shocked that September’s nearly over already. At least I’m never bored!