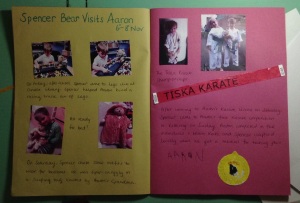 We had the joy of a visit from the class bear this weekend: my son had a karate competition and wanted Spencer to come.

But you can’t take photos at karate, so it makes filling the precious diary slightly challenging.

I finally pinned my son down to complete the diary this evening, but it’s fair to say it was mostly a Mummy effort.

And it’s all lies. Well, not lies, but hardly a true reflection of our weekend. This is what it should really say:

“On Friday night Aaron got cross because Mummy wouldn’t help him with his Lego. On the way home he whined about not being allowed a snack, even though he’d had two cakes at the school bake sale. He forgot all about Spencer, and the bear would have slept with the dog if Mummy hadn’t taken him upstairs.

Saturday was torrential rain, and football was cancelled, so Spencer lay forgotten in bed while Aaron watched six hours of TV. Spencer ate more piada at lunch than Aaron did.

Spencer nearly missed the karate championships when Aaron was more interested in watching the end of his programme and hugging the dog goodbye. Aaron was first up at the competition and completely forgot his Kata. Aaron sulked because he didn’t win a trophy. Despite being super-brave and doing the group Kata, Aaron still didn’t win and did more sulking. Mummy lost her rag when he refused to get changed in the car.

Spencer had McDonalds for lunch. Mummy is desperately knitting a new scarf because his old one has been stretched to death being used as a karate belt.

Mummy printed the pictures, cut and stuck them and strong-armed Aaron into colouring a picture when he wanted to watch a fifth Power Rangers. Spencer will be glad to get back to school on Monday.”

Facebook, Blogging, and now the school bear’s diary: it’s all about how you spin the truth!