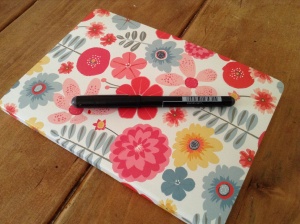 A book of ideas

I’ve decided to park Finding Lucy for now, as I need to start writing now to get back into the swing of things and the draft needs far too much analysing to write anything more on it yet. So today I ran through my scribbled list of projects looking for inspiration. I didn’t find it, even though the list is rather long!

Current Drafts:
Finding Lucy (needs too much work)
Bonds of Love (ditto, plus has overlap characters with Finding Lucy)
Annie and Phoebe (about a Georgette Heyer novel that isn’t in public domain, so a no go for self-publishing)
Dragon Wraiths part two (don’t have the energy to pick through the hot mess of the last few chapters)
Alfie and the Arch (don’t feel qualified to write kids’ fiction at the moment)

Pencilled in Sequels
Sequel to Two Hundred Steps Home (don’t have energy to re-read the 200k original to pick up the story thread)
Sequel to Baby Blues following Ben and Sharni (isn’t grabbing me, lots of cultural research required)

Totally New Ideas
The Pudding Club (an idea that floats around every time I catch up with my old colleagues – a novel or play written just through dialogue at regular catch-ups. Bit worried my friends will try out work out which one is them or take offence.)
Dad Starts Dating (a YA about a girl whose divorced parents start new relationships – based on personal experience; I worry I would end up offending my mum!)
Colony on Jupiter (YA? – one of the dream stories I actually wrote notes on rather than immediately forgot. A bit like the TV series 100, although my idea predates watching it, but where the space station is a functioning community with shops, school etc)

But a) I worry that straying from the stye of Class Act and Baby Blues will be a mistake (although I can’t give Class Act away, so there isn’t much to break) and b) I’m really not sure I have the imagination to pull it off without plagiarising something. It’s no coincidence that my characters are loosely based on me: my biggest fear is stealing someone else’s idea/style/world. I found it happened a lot with Dragon Wraiths, whereas it was easy to imagine the settings for Class Act and Baby Blues.

I feel like when I can’t decide on a new book to read, which ironically is also a problem I’m having. I have three or four good novels half-finished on the kindle and have reverted to the failsafe of Harry Potter just to keep reading. It feels like I poured all my creativity into loombands and knitting and art in August and now I’m empty (and have RSI!)

Arrgghh. Writers out there, where do you get your ideas from when you’re stuck? How do you choose your next project? I have been working on old manuscripts for so long I’ve forgotten how to start something new, and I’ve never started something without a glimmer of an idea from a dream or a character or an idea how the story ends. Maybe it’s time to get an early night and hope I remember my dreams!

One thought on “Searching For The Next Novel Idea”