For anyone new to the blog (where have you been? *grin*) I spent last year undertaking a writing experiment I called the 2013 365 Challenge.

I set myself a tri-fold task: I would write a blog post everyday, I would include pictures in every post (mostly from what I had been doing that day) and I would write an installment of a novel every day. Not just serialise a novel already written, or write 10,000 words at the beginning of the month and parcel it up, but sit down every single day and think of something new to happen in my novel.

I set myself rules, too. I would try and post by 10am every day (which I mostly did!) I would collate each set of installments into a free monthly ebook and publish it by the last day of the month (which I mostly did). And, most importantly, I would not go back and change things (which I didn’t, aside from typos and spelling mistakes, which slipped through due to tiredness, and – once – when I accidentally changed the name of a character to one in the novel I was also editing at the time. I changed that for the sake of readers’ sanity. But I never changed more than a word at a time).

I think reaching the end of my challenge, the end of Claire’s (my protagonist’s) story, and realising I had written 285,000 words in a year and published them, counts as one of my greatest life achievements. 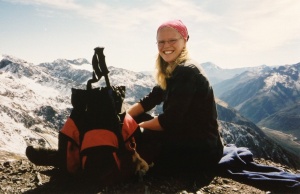 Me before kids (when I got sleep!)

It isn’t Pulitzer Prize winning fiction. In some places it rambles. In many places I’m sure the lack of editing is obvious. But, still, hundreds of people read it and enjoyed it (as far as I can tell, by almost as many copies of the later volumes being downloaded as the first one). I felt like I reached the mountain top and the view was amazing.

I’m still processing all the things I learned from my challenge, but I promised in yesterday’s post that I would write some of them down. So these are the things that occur to me right now:

I’m sure there are loads more things I’ve learned and I’m equally sure that some of these things only apply to me and not to all writers. Looking at the list, though, it makes me realise how far I have come as a writer and how much my confidence has grown. Turning up to work every day, whether I wanted to or not, moved me from “aspiring writer” to “writer”. I just need to make sure I keep it going! This year’s (unofficial) challenge is to build on my learning and concentrate on the craft of writing. Quality over quantity. I’ll keep you posted.