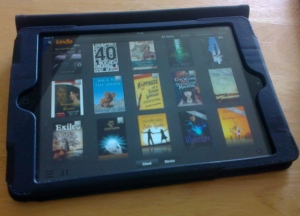 A fraction of the unread books on my Kindle

I read an article today, on Sally Jenkins’ blog, about reading as a writer and how it can destroy the magic of reading. I have to agree. These days, reading feels like a lot like work rather than pleasure.

Back when I was at university I read very little for fun. During my history degree it was lack of time, combined with strained eyesight, after reading dry historical works all day. During my English courses and Masters degree it was because I analysed everything, wondered about the author’s intention or tried to map character motivations. (And after reading the entirety of Clarissa, I never wanted to see a novel ever ever again!)

But at least that still kept me within the story: thinking about the action and the people. I was on the stage with the puppets. Now I’m a puppet master, above it all, seeing the strings, if not always understanding fully how they all work. And it has lost its magic. Like knowing how a illusionist’s trick is done I am super analytical and, if I’m honest, critical. It isn’t confined to the characters, plot or flow of the story either, but right down into the nuts and bolts of word choice, dialogue, even consistent formatting.

I’m reading two books at the moment that I’ve been looking forward to and I’m struggling to get swept away by either. It makes reading painfully slow and hard work, although whether it’s improving my craft remains to be seen. I can’t put my finger on exactly why I’m not enjoying them, so I don’t know how much I’m learning. At the moment I feel like the only time I’ll enjoy a story again is when I’m drafting it for the first time (because, quite frankly, if reading the well-crafted stories of masters like Terry Pratchett is giving me a headache, reading my own efforts is excruciating!)

Thank goodness I don’t write music is all I can say.

Claire listened to the deep voice answering her call and went blank. Blood rushed loudly in her ears. What was she doing?

The voice now held a tinge of irritation. If she didn’t speak she would only have succeeded in making things worse

“Claire! I was starting to think I had some creepy stalker. How are you? Are you still in the UK?”

The warmth in his voice helped to lessen the quivering in her knees. She wondered whether to chat or jump straight in with what she wanted to say, before she chickened out.

“I’m fine, thanks. Good. I’m in Devon. With Kim and Helena, actually.”

“Your wife and her sister?” Claire injected a humour she didn’t feel into her voice. This wasn’t going to plan at all. When she’d rehearsed the conversation in her head, during her surfing session with Conor, there had been no awkward silences and unanswerable questions.

I guess it’s easier when you provide both sides of the dialogue.

She wondered whether to abandon the attempt and make up some reason for her call. Jeff was going to think her an interfering cow at best, and if she made things worse between him and Kim, her friend was likely to fly off the rails again.

“I know who they are, I just didn’t realise Helena was back from Hong Kong.”

“When did you last speak to Kim?” Her voice was wary now.

“Maybe you should take time to speak to her now and then. She is your wife. Then you would know that her pregnant sister is home.”

Jeff’s shock was palpable and Claire felt relieved that it meant he missed the antagonism in her voice. She hadn’t meant to pick a fight with him; but to find out he hadn’t spoken to Kim for weeks really stunned her. They were married. Surely husband and wife spoke every day? At least that’s how she’d always imagined it would be.

“Yes, apparently some indiscretion meant she was sent home under a cloud. Kim needed moral support, so she and Helena are staying with me in Devon for the weekend.” She stopped, unsure what to say next. She didn’t think she needed to spell out to Jeff why spending time with her pregnant sister was hard on Kim, but then she didn’t think she’d have to tell him anything.

Is this what it means to get married: to drift apart at the first crisis? I think I’d rather stay single and know that no one is there for me, rather than find out at the worst possible time.

She tried to picture Conor abandoning her, and smiled. He’d proved already that he was the most reliable friend: collecting her from the airport, taking her to see Kim in hospital. The memory pulled her back to the purpose of her call, and she pushed the pictures of Conor away.

“Anyway, I wondered if you wanted to come down and stay with us for a day or two. I realise it’s short notice, but it would mean the world to Kim.”

The line remained silent, and Claire wondered if Jeff had hung up or put the phone down and walked away. She held her breath; the pulse throbbing in her temples keeping time, counting down the seconds.

Eventually he inhaled audibly and said in a stilted voice, “I would love to, Claire, but I have to work.”

“On a Sunday? I know it’s a long way, but you could be down and back in the day, or you could come tonight.”

“It’s just not possible.” His tone indicated the conversation was over.

Hot blood flooded beneath Claire’s skin. “That’s utter bollocks, and you know it. You guys have been married three months. Three months! Kim needs you. What happened, Jeff? When I last saw you, you couldn’t do enough for her. And now you barely talk? What gives? Are you having a bloody affair, is that it? Your wife is broken and instead of trying to put her back together you sod off and bed someone new?”

Claire ran out of breath and stopped, panting, wondering what had come over her. She waited for Jeff to start shouting, or hang up, but he did neither. She could hear him breathing and it sounded as if he was labouring under strong emotion. When he spoke, his voice wavered.

“It was my child, too. I never knew I wanted to be a dad until that damned blue line. And then the wedding, and the uproar, and the miscarriage. No, I’m not blaming you, before you think I am. The doctors said the pregnancy wasn’t viable. And now they think she can’t get pregnant again. But there are doctors that will help, I’ve looked into it. I spent hours reading up, while Kim was low, and then after she tried to kill herself.”

He took a deep breath, and Claire waited, stunned.

“When you took her to her mother’s, it meant I could do something about it. I’ve got another job, evenings and weekends, to raise money for the procedures. I didn’t want to tell Kim, get her hopes up only to have them dashed again. I didn’t think she could handle that. I didn’t mean not to call, but I’m so tired: if I’m not working I’m asleep.”

He went silent, suddenly, as if his outburst had cost him too much. Claire’s mind whirled while she processed the words.

“You have to tell her,” she said, quietly. “Please. She needs something to live for, to hope for. Otherwise you’ll raise the money, turn around, and she’ll be gone.”

“No, not really. But sharp, edgy, brittle. Spending time with Helena is not doing her any good. The girl is glowing and, although she doesn’t say much in front of me and Conor, I know the relationship the two of them have. I don’t doubt she makes little digs. If Kim could reassure herself that she has a solid marriage and hope for the future, she’ll have one over on her sister.”

Jeff sighed. “What a bloody mess.”

Claire could imagine him running his hands through his hair, and she yearned to give him a friendly hug. How lonely must it be, in the flat alone, working all hours.

“Just give her a call. You don’t need to mention we’ve spoken. She and Helena are downstairs with Conor. They think I’m working.”

“Don’t mention it. I just want my friend back.”

She hung up the phone and hoped it was that simple.