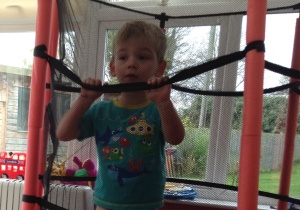 Can I come out now?

I’m starting to really enjoy Saturdays since my daughter started school. For the first time I can vaguely relate to the host of mothers who look forward to the school holidays.

I used to follow the debate with interest, as those mothers climbing the walls by day two of a school vacation fail to understand the mums that love every minute. I will be a bit of both, I have no doubt, but the fact that there is anything to look foward to is encouraging.

I was wide awake at 4.30am this morning, despite it being the weekend. Hubbie was out with work last night and I fell asleep on the sofa at 8pm, as I have been doing all week. I feel like I have jetlag. I’m not even watching the cricket (as a Brit, I’m happy to give it a miss just now). I think it’s the time of year, with the dark nights and a brain buzzing with Christmas plans; it throws my body clock out of kilter.

So I ventured downstairs in the wee freezing hours and ended up standing at the family computer (which is on top of the piano at the moment!) for four hours looking at photos for November’s cover. The children shuffled down at 7.30am and hubbie appeared nearer ten o’clock, despite not drinking on his night out. We’re getting old! 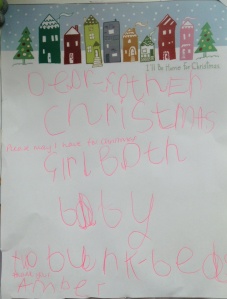 The thing I love about Saturdays is the way the children take themselves off to play while hubbie and I get a chance to chat. Today, my daughter was running school in the playroom, teaching my son his words. Aside from a gentle reminder to her that he’s only three and can’t read yet, they occupied themselves for hours without intervention. The trampoline has been a godsend, too, allowing our energetic boy to burn off steam without getting into trouble.

I finally dragged myself away from online Christmas shopping to cook lunch and encourage the kids to write their letters to Father Christmas. They’re not really hyped up about the big day (I worry that they’re spoiled because they can take or leave getting presents – they’re more interested in their chocolate advent calendars) but I need to be organised this year, if I’m going to find time to write a satisfying ending for Claire.

After lunch I risked a trip to the local shopping centre to get white tights for my daughter’s nativity (she’s an angel) and to let the children to cash in their reward charts. Goodness me the supermarket was heaving, but my darlings were superstars. Funny how much more relaxed they are when I’m not in a hurry. I guess it took a strict routine for me to appreciate the freedom we always had before.

I’m not saying the school holidays don’t still fill me with trepidation, but there is a ray of light. The contrast to the school run stress and chaos appears blissful, at least from this vantage point in the middle of it. For the first time since the children were born I’m looking forward to the end of term.

Claire looked at the faces staring expectantly across the table at her and wanted to scream. The boys had only been with her for a week, and she had crammed as many activities as possible into their days, not just to wear them out, but to keep herself from flying apart.

When they were occupied they didn’t bicker and she had more space to think about her assignment. Although time to think wasn’t always a blessing. Conor hadn’t been in touch since the visit to St. Mawes Castle. She kept reminding herself that a week in the office wasn’t like a week with two boys to entertain, and that he’d just been too busy to contact her.

As the weekend came and went with no surprise visit, she couldn’t ignore the insidious sense of disappointment that sharpened her temper and dulled her senses.

“What are we doing today, Aunt–, I mean Claire?” Jack was the first to break the silence. After a week together they had finally learnt it was best to wait until she’d drunk at least one cup of coffee before they badgered her with requests.

Claire looked from Jack to Alex, trying to work out how much energy she had and what activities were left on the list. They’d been based in the same hostel all week – one without internet or phone signal, which was driving her almost as crazy as it was Alex. Part of their daily routine incorporated locating a café with free WiFi.

“Are we moving to a different hostel today?” Alex looked up from his phone, having long since given up waving it around in an attempt to find the elusive spot where a text message might go.

Claire smiled warmly at her eldest nephew. “Yes, Alex. I have to say, you’ve coped brilliantly with the lack of contact with the outside world. I’m sorry it didn’t occur to me to check before I booked us in here. The location is brilliant, though, isn’t it? And the pool table has been fun?”

Alex nodded without enthusiasm. Claire suspected their hilltop location, with views to die for and a crystal clear beach in walking distance, had been more her idyllic holiday destination than theirs. The next hostel on the list wasn’t much better, but they were only there for one night, possibly two.

“We’re staying next to the lighthouse tonight – that will be fun, won’t it? Although let’s hope it isn’t foggy. Apparently the foghorn sounds all night in bad weather.”

Jack was definitely more her kindred spirit. He’d done the cliff top walks, the pony ride and jungle trek with obvious delight, whilst Alex had only really come alive at the theme park. Claire shuddered at the memory of being dragged on the rides, and wondered why she hadn’t thought to take the boys there when Conor was with them, instead of to the castle.

Their windsurfing lesson the day before – which Claire had excused herself from, claiming work commitments – had been Jack’s crowning glory, as he’d been the only lad of his age to come near to controlling the unwieldy craft in the allotted time. Claire wondered if there was anything that might remotely interest Alex.

“Yes, I believe you can play lighthouse keeper,” she said, in response to Jack’s question. “I think you even get to sound the foghorn and have a go at tracking ships.”

“Brilliant.” Jack said, and received a disgusted look from his brother. “What? Just because you’re in lurve,” he drew out the word, “doesn’t mean the rest of us have to be boring.”

Alex punched him on the arm and Claire concealed a smile, for once not irritated by their fighting. It had taken a while to get used to the physicality of brothers. With two sisters in the house, Robert hadn’t been a rough-and-tumble child, although she remembered a few times when they’d fought. Mostly he and Ruth had been the ones at war, verbally more than physically. Claire found the fighting easier to deal with than the telling tales and snide remarks she remembered from her own childhood.

“Leave him alone, Jack, and Alex, don’t hit your brother.” She drained the last of her coffee, making a mental note to pick up takeaway when they stopped at the café, and stood up.

“Right, here’s the plan. We’ll go check in, visit the lighthouse, and get our bearings. Alex gets to choose tomorrow’s activity.”

A surprised smile from the older child rewarded her suggestion and she returned it gladly. As they left the breakfast room in relative harmony, Claire felt that she might be starting to get the hang of this parenting lark.