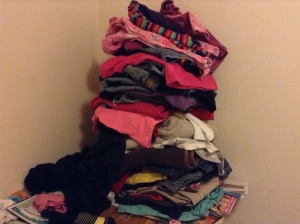 Sometimes the choices we make for ourselves are the hardest ones to live with. Situations that life throws at us can be endured, but taking responsibility for our own actions, our own choices, takes more courage.

Six years ago I chose to leave a good job because it wasn’t for me and was making me miserable. Hubbie supported me in my decision, even though I had no job to go to. I had every intention of making money selling paintings, not realising what a daft dream that was, and ended up contracting instead. Hubbie had to put up with my grump as I commuted four hours a day, leaving at 6am and getting back at 8pm.

Then I got pregnant and knew I wanted to be at home with my children as much as possible. Not full time, I wasn’t capable of that. But we reordered our finances so I could have a day or two to write without feeling pressured to earn enough to pay for the childcare. My part of the deal was taking on all the household chores. It was a fair trade.

When hubbie was made redundant I accepted that most of those chores and childcare duties would remain mine as he sought work and undertook DIY projects. But it’s one thing doing all the house stuff when you’re the only adult in it and another still doing them when someone else is there, even if they’re busy working. Mostly I manage to keep perspective, with the odd request for hubbie to empty the dishwasher or cook dinner.

During the daily blog nightmare, hubbie has been amazing, taking the kids, doing the school run, giving me time to write. And I love him for it. But on days like today, when time is precious, and more hours have been spent on housework and chores than writing, I find myself getting resentful and snappy, even when I know he is working too.

Hubbie and I had a row as I chucked the makings of stew in the pot before rushing out to collect the kids. I haven’t written a word today and it makes me crabby. But these were my choices. I don’t have to go to work on Monday. He does. I don’t have to worry about meeting new colleagues or still finding time for the kids. I appreciate everything he has given me and I try so hard not to complain.

So this is an apology to him. I know I made my choices, and they genuinely make me happy. Sorry I forgot for a moment.

Claire looked around at the endless rows of cars and tried not to panic. Remembering her father’s advice, she pushed her shoulders back and pasted a smile on her face. Confidence, that was the key. That, and knowing he had agreed to lend her five hundred pounds to buy her first car. She felt eighteen years old.

Claire peered through the window of the nearest vehicle, despite the price tag hanging from the window. She wondered if there was anything in her price range.

Probably tucked at the back, out of sight.

She sighed. There was no denying that it hurt to be looking for a tatty rust bucket rather than a nice Audi or BMW.

I made my choices, I guess.

The voice greeting her was closer than she expected, and it made her jump. Turning to face the source of the voice, she had to suppress a giggle. He looked about ten years younger than her, in a shiny suit that didn’t seem to fit very well.

“Well you’ve come to the right place.” He laughed, then stopped as Claire raised an eyebrow at him. “What kind of car are you looking for?”

The salesman looked her up and down and she could imagine him taking in her stretch jeans and polo shirt, the sunglasses holding back her heavy brown hair, and trying to decide what would best suit her.

“How about a nice Range Rover, or the BMW X5?” He looked around, as if surprised to discover there weren’t any parked right by him.

Claire didn’t know whether to be flattered or horrified that he clearly took her for a yummy mummy. “I’d love one, but my budget doesn’t stretch I’m afraid. I just need a runabout that will take me around the West Country for a few weeks. When I return to the city I won’t need it.” She hoped her cover story – that she was on assignment from a City job – didn’t sound too forced. Then she wondered why it mattered what some lad in the sticks thought of her.

“Oh, right.” The salesman’s face fell dramatically and Claire half expected him to stick out his bottom lip. She guessed he was paid commission.

There’s not going to be much coming from me, I’m afraid. Better luck next time.

She followed the man through the sparkling sea of cars to the back of the lot where, as she suspected, the two or three cheap cars lurked unwanted and unloved.

Her Dad had explained they would be trade-ins and there wouldn’t be much choice, as the garages usually off-loaded them at auction. “I don’t need choice,” had been her response, “I need reliability.”

Her dad had sucked air in through his teeth and asked her if she had breakdown cover. It didn’t bode well.

The salesman started rambling on about low insurance groups and minimal tax. Claire let the words wash over her as she peered in the windows of the brown, beige and grey cars huddled together as if for protection.

Why do older cars look so furtive? As if they’re glad to have escaped the crusher?

Even with the fondness she had developed for the Skoda, Claire still shuddered as she opened creaking doors to be greeted by the stink of stale smoke and overpowering air fresheners.

She climbed inside the least awful car and flinched as her hands touched the sticky seats. Quickly climbing out, Claire smoothed the grimace off her face and turned back to the salesman.

He nodded, all his exuberance gone as he realised he was unlikely to make a sale.

With a shrug, Claire looked them over again. “Which is likely to be the most reliable?”

The boy shook his head, to indicate he had no idea.

“Well, can I speak to your boss, then, please?” Claire stood with one hand on her hip. The salesman hesitated, then nodded again and strode across the parking lot.

It was several long minutes before an older man threaded his way through the cars towards her. Claire had had time to regret her request. It was easy to keep up a front with the inexperienced salesboy, but a manager was likely to prove tougher.

“Can I help you, madam?” The man asked, in a deep gravelly voice. His eyes twinkled and his face showed signs of habitual laughter.

Claire felt herself relax slightly. “I need a cheap runabout to get me round the West Country without breaking down. I’ve only got five hundred quid.” She gave a wry smile. “The Company doesn’t believe in exec cars, and I’ve never needed one before.” That was mostly the truth.

She half expected the man to rub his hands in glee and sell her the worst of the lot. Instead he smiled, and gave an understanding nod.

“It’s going to be tricky to find reliability for that kind of money. What you need is something that’ll be cheap to fix.”

It wasn’t what Claire wanted to hear. Maybe hiring a car would be a better option after all.

“We’ve got a nice Vauxhall Cavalier. You could probably fix that yourself if it broke down.” He gestured towards a boxy red car in the corner that Claire hadn’t noticed before. She walked over and peered through the window. She felt some of the tension leave her neck and shoulders as she saw a neat black interior. When she opened the door it smelled clean and cared for.

“Owner didn’t want to part with her, but the wife popped out a fourth and they had to get a seven-seater.” The manager walked up beside her. “It’s only done forty-thousand miles. Twelve months MOT, six months tax. It’s got a sunroof and electric windows, which is pretty good for a twenty-year-old car. It’ll get you forty to the gallon, which you’ll need if you’re putting in some miles. Petrol, too, so cheaper to run these days. Not like it used to be.”

Claire climbed into the car and let the man’s words flow around her like summer rain. It was bigger than the Skoda, more comfortable too.

“You’ll need to watch the oil and water,” the man continued, “they can get a bit thirsty. Should be cheap to insure though. Small engine.”

With her hands on the steering wheel, Claire sat back and let her body sink into the seat. A car. Her own car. To drive wherever she need to go. A smile spread across her face.