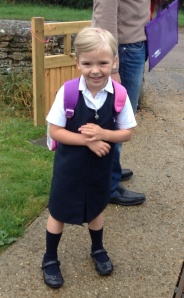 Attempting to plait my daughter’s hair this morning was the proverbial last straw. Her hair was shiny from washing and she has a double crown. It’s had me swearing most days since she started school as she’s never worn her hair tied back before and I’m rubbish at plaiting someone else’s hair (especially a wriggly child).

Today I lost it. Full on panic attack, sobbing, hysterics the works. Bless my amazing family: hubbie did the plait, son gave pats and leg cuddles and daughter said repeatedly, “It’s okay Mummy.” However much I worry about the impact my hormonal instability has on my children, there’s no doubt it’s taught them empathy.

It’s also taught them blindness to difference, in a way. Mummy’s behaviour is normal to them, so if they encounter anyone having an episode, be it panic attack, asthma attack or emotional breakdown, they’re likely to remain calm. That counts for something, right?

Given that they’re likely to inherit an element of serotonin imbalance from their parents, hopefully they’ve also learned to give themselves a break: to let it pass and get on with their day as I had to do, with hubbie off to an interview, two kids to drop off and pick up from different places and a birthday party to prepare for.

Self awareness is a blessing and a curse and I’m not entirely sure my kids will thank me for introducing them to it early. But there’s no doubt it’s easier dealing with a toddler tantrum when it comes with “Mummy, I’m sad because…” rather than just screaming rage.

Claire opened her eyes and looked at Bethan, before closing them tight again.

Around them, the aircraft vibrated as it climbed into the clouds. The man behind Claire kept checking an altimeter in his hand and providing a running commentary.

Claire wished he would stop.

“Remind me why I let you talk me into this?” She yelled above the noise of the engines.

“So you could impress your new boss.” Bethan yelled back.

“Maybe I could just buy him a beer?” Claire thought about it some more. “I’ve already done grade five water rafting, hiked across a glacier and kayaked with seals. This probably wasn’t necessary.”

“But just think how cool you’ll look. It was this or the bungee jump.”

Claire’s stomach lurched at the idea. For some reason jumping out of a plane at fifteen thousand feet seemed an easier option than throwing herself off a bridge with a piece of elastic tied to her ankles. This way, at least it wouldn’t actually be her doing the jumping. She was pretty certain the burly blonde man designated her tandem partner would make sure she didn’t chicken out.

“Fifteen thousand feet,” the man announced on cue. “Time to get ready, ladies.”

Claire looked around the cabin at the other passengers. She seemed to be the only one not grinning. Even the seventy-year-old grannie was peering through the open doorway with interest. Maybe you worried less about dying when you’d lived more of your life.

It was the grannie that had swung it, in the end. Bethan’s entreaties had fallen on deaf ears. She’d let herself be talked into the heli-hike and, although it had been beautiful, she wasn’t sure it had been worth the money. This was equally expensive, especially with the extra for the photographic evidence, and Claire was pretty certain she was going to enjoy it a lot less. Then the old lady had turned up, and shame had taken over.

Claire felt numb as she followed the burly man’s instructions, listening intently as he ran though again how she had to hold her arms and what she needed to do on landing.

Then, before she knew what was happening, a body plummeted from the plane. Claire’s heart skipped and her instinct was to reach out and grab at the disappearing figure. Then another person fell, and she realised they had started to jump. Her stomach knotted tight and she thought she might be sick.

One by one the passengers disappeared from view at incredible speed until she was the last one left.

“Let me go back down in the aircraft, I’ve changed my mind.” She could feel the blood draining from her face and wondered if the man would still jump if she passed out.

“Sorry, chick, there’s only one way down. You’ll be fine, no worries.”

He shoved her towards the gaping hole, and Claire just had time to register the blue of the lake and the blend of green and white of mountains before air was rushing past her and she was falling.

Shock pushed all the air from her lungs and she gasped, unable to breathe. The wind pulled at her cheeks and the cold burned her skin. Claire barely registered the ground leaping up to meet her or the other skydivers around them, until her host tapped her on the arm and she looked over to where he pointed.

Falling alongside them was the camera girl. She waved and gave a thumbs up. Claire tried to smile but her face was frozen in a mask of fear.

The camera girl circled them, taking pictures, before changing her body position so she could dive to the next person and photograph them. Part of Claire’s brain marvelled at her casual ease, as if she were walking across a garden rather than plummeting at 200km an hour through the sky.

A sudden jolt told Claire the parachute had opened. She watched as other chutes opened beneath her. She could see some of the people swinging from side to side, spinning in spirals down to the lake. It looked like fun. She waited for her host to do the same, but he didn’t.

Still breathless and panting, she was unable to ask him why they were falling so sedately. Disappointment clouded her vision and she looked at the view below through jaded eyes. Her host clearly thought she was having a panic attack and wanted to get her to the ground quickly and gently.

She wanted to explain she was fine, that it was only the shock of the jump that had stopped her breathing, but there wasn’t time. The land once more rushed up to meet them, and before she knew what was happening, it was time to lift her feet up and let the man land.

“That was amazing! I want to go again, now!” Claire looked around for someone to hug, and saw Bethan running towards her.

“Aren’t you glad you did it? How awesome was that? Especially the spinning at the end.”

Claire’s face fell. “I didn’t get to do that, I think Muscles over there thought I was too scared.” She saw Bethan frown, and realised she was being a killjoy. “But, oh my goodness, it was brilliant. Thank you so much for convincing me to do it.”

They walked arm in arm to return their kit and watch the video. Claire wondered how she would drop it into conversation with Conor that she had jumped from an aircraft at fifteen thousand feet. She wondered if he would be impressed.