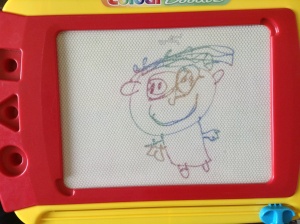 I don’t really have a post topic for today, for the first time in a long time. Ideas have been floating around in my brain, but none have consolidated into a post. This is partly because we walked the dog as a family this evening, rather than just me and my mobile phone (which is when most blog posts are written). Despite little man’s frequent crying fits – a combination of little sleep last night and a long day – it was a lovely walk. We picked and ate blackberries; well worth the sacrifice of a blog post.

So, instead, I thought I’d list the random thoughts, some of which may become blog posts as and when time, sleep and muse are aligned.

1. My son went to Forest school for the first time today. Basically a preschool session held in a local woodland, surrounded by stinging nettles and with no facilities, it’s a great opportunity for kids to get outdoors. He didn’t cry and I was very proud. I wish all schools had a classroom in the forest (we actually wanted our kids to go to the school the classroom belongs to, but decided against it because all our daughter’s friends were going to a different one.) In my view children don’t spend enough time outdoors learning how to avoid stinging nettles and discovering which berries they can eat.

2. My daughter had her first proper play-date friend over this afternoon, as one of my baby group mums is suffering – as we are – from the slow start to the school year for our particular school. The children played together brilliantly; much better than they do when all the parents are present. Why do kids feel the need to act up when their parents are watching and behave like angels when they’re not?

3. Related to the above point, I do much of my parenting through the kitchen window these days. It means I can ensure the children’s safety without having to tell them off every five minutes for things that are technically against the rules but harming no one. My kids and the play date friend emptied the sandpit into the paddling pool today – most definitely against the rules. But it’s the end of summer, it was a hot day and they were in the shade, and – best of all – they were co-operating and having fun. Sometimes you have to turn a blind eye to the rule breaking. I think of it like plausible deniability.

4. I went to the doctors today in my on-going saga to understand if I have depression or am merely suffering from exhaustion. The GP I saw was the same one my hubbie saw last week about his anxiety. She was not helpful. The only thing she wanted to do anything about was my hubbie’s snoring: that was something real she could fix. I hate speaking to doctors who don’t understand or refuse to admit that mental illness is as real as diabetes or high blood pressure, even though just as invisible on the outside (although, I admit, harder to measure). She basically told me that I have to get several good nights of sleep “For the sake of my family.” I came away with the impression that I was willfully choosing to get up to the kids in the night and sleep in the same bed as my snoring husband even though it made me a bad wife and mother in the day time. Grrrr. Time to see a different GP.

Oh look, my random thoughts have reached the magical 500 words. Thank you for listening and good night! I’m doing as I am told and going to bed before 11pm 🙂

Claire read the text message and beamed at the empty dorm room, wanting to share the jest. Trust Conor to have something stupid to say to lighten the heaviness she’d been carrying since Wellington. She looked at the message again, marvelling that Conor’s humour was so like her own.

Thank the lovesick puppy for me; sounds like I’ve got more chance of getting you to work for me now. Nothing will send you home quicker than needing to leg it from a clingy bloke with baggage.

It seemed strange to think she would be back in the UK in a couple of weeks, or that it had only been three weeks since her interview for the Dorset job. Her time away felt crammed with a lifetime of experiences.

I suppose something good came of losing my best friend: I would never have run away to New Zealand if Kim hadn’t accused me of killing her baby.

The thought set her heart hammering, and she realised it wasn’t something she could joke about, even in her own mind. What if she had caused the miscarriage, by letting slip Kim’s news to Michael? Suddenly all the lightness slipped away and her mind returned to the dark.

And now I have needy Josh, my new shadow, as penance. I guess I deserve it. Thou shalt not covet another woman’s husband and all that. Just as I was horrified that Kim was throwing her career away for a baby. Why do my stupid thoughts have to come back to bite me.

Looking up at the door, Claire exhaled at the sight of Bethan. She didn’t want Josh cornering her in an empty room.

“There you are. It’s time to go kayaking, if you’re still coming? Some of the guys are catching the taxi boat, but I want to have a go out on the water.”

Claire stuffed her phone in her bag and nodded. “I’m coming.” She shouldered the rucksack and followed Bethan from the room.

“What were you doing by yourself in there, anyway? Texting loverboy? He’s waiting for you downstairs.” Bethan grinned.

Claire twisted her fingers while the tour guide allocated them into pairs for the double kayaks they would paddle down the coast. She shuffled nearer to Bethan, conscious of Josh sidling up on her other side. Claire tried to exude her best ‘I’m invisible do not speak to me’ vibe, that she used to use on the Metro. It didn’t work.

The guide, a tanned woman in her twenties, looked directly at them. “You, Bethan? You can come with me. Claire, is it? You’re with Josh. Simon and Lee, you two are together, and, Sally was it? You’re with Matt.”

Claire swore under her breath, conscious of Josh grinning behind her. Bethan threw her an apologetic look and went to stand by the tour guide.

“Why are you avoiding me, Claire?” Josh spoke quietly into her ear, making her shiver. “I’m not about to force myself on you. If you’re not interested, that’s fine, although I must have got my wires crossed.”

The hurt in his voice made her heart clench and she turned to say something, but he was already striding towards their kayak. Her mind churned with conflicting emotions. This Josh confused her, but she couldn’t deny she was still attracted to him. Maybe Bethan was right, perhaps she should let down her guard and see what happened. Or at least try and talk to him, tell him to go back to Fiona. What did she really want? And what was right?

With a sigh, she crossed the sand towards the craft waiting by the water. Blind to the beauty of the sparkling sea, the endless white sand, she took a deep breath and pushed her shoulders back.

It feels like my job in life is to reunite this man with his family.