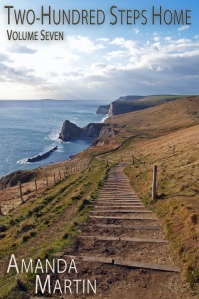 Vol7 Cover, no feet but steps!

And so another month ends, another volume of Two Hundred Steps Home goes live on Smashwords. Volume seven! Holy cow.

I found today’s installment the hardest to write. My hands were shaking by the end of it. It twists my stomach even thinking about it now. It took every ounce of willpower learned through 212 daily posts to sit down and write it, because I’m not sure I did the right thing. It is such a heavy blow for Claire. I tempered it from the original, with Jeff’s words, but I’m not sure if that’s enough.

I worry what it says about me (as a person and/or a writer) that what started out as a light-hearted story, with even a few laugh-out-loud moments (according to my husband) back in volume one, has turned so dark. I know I’m not a light-hearted person. Life is tough. And beautiful and amazing, even funny sometimes. But it seems to me that humour in Chick Lit is often at the expense of the protagonist.

And, just as I find it hard to be mean to Claire, I find it equally hard to make an idiot of her. In the early days it was easy. We didn’t know each other very well. She was a parody, a stereotype. We know each other better now.

I notice with my friends that they don’t laugh much with me, but when they are talking to each other they always laugh. I’ve listened to a few exchanges and much of it seems to be about taking the mick out of each other. I’ve never been very good at that. Even with people I know really well, I’m always worried I’ll overstep the mark and what I think is good-humoured jibbing will actually upset them. I used to spar with a friend of my father’s, because he was thick skinned, and my vicious sarcasm never wounded him. Since then, not so much. 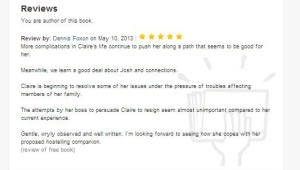 I remember, growing up, that I didn’t like being teased. I took it all too personally. I couldn’t tell the insults from the banter. People soon learned not to wind me up unless they wanted to upset me. Even now, I only really laugh with the children (and then sometimes I have to remember not to get hurt by the blunt things they say).

What does this mean for me as a writer, though? Is Chick Lit my genre, if I can’t write funny? If I can’t stand to let my lovely characters embarrass themselves? Is my writing doomed to become morbid and depressing?

It’s noticeable to me that only the first three volumes of Two Hundred Steps Home have reviews. I’m grateful that no one has written anything nasty about volumes 4-6 but I do take the silence to mean they’re not as good as the earlier volumes.

Sigh. This writing journey is a toughie. I can only hope that I can edit humour in, much as I edit out adverbs. When I’ve finished my daily blogging journey, I hope to take the masses of raw material written about Claire and turn it into one (or probably two) full length novels. This is a first draft after all. In the meantime, sorry, Claire, for doing this to you…

Claire tried to convince her niece that it was time to leave, but Sky’s protests threatened to reach tantrum proportions. Not feeling up to a scene, Claire admitted defeat and suggested instead that they stay in their seats during the interval.

“But, Auntie Claire, I want to see Kim and Jeff. Kim was awesome! And the fairies were brilliant. I want to be a fairy.”

Sky rattled on, filling the half-empty theatre with her chatter. Claire wished she’d had the forethought to bring a flask of coffee or a can of gin and tonic. A hip flask of neat vodka would probably be of most use.

Remembering the look on Kim’s face, Claire bit her bottom lip and willed herself not to cry. We’ve fallen out before. She’ll come round. It wasn’t possible to be friends from the age of five and not have moments of disagreement. There were years when they hardly spoke, as their lives took different paths. They’d always made up and stayed friends, through boyfriends and jobs and university shenanigans. Even when she hadn’t spoken to Kim in months, Claire had always felt the benign presence of her friendship. The idea that it was gone left her shaking.

Claire jumped at the voice in the darkness. The quivering returned to her limbs and she was grateful for the hard plastic beneath her. Jeff slid into the seat next to her, his face concealed in the gloom. He was about to speak when Sky noticed his arrival and jumped up, pushing past Claire to throw her arms around him.

“Here, poppet, play a game on my phone for a moment. There’s a good girl.”

Sky seemed to pick up on the tension and, for once, didn’t challenge Claire’s request. She took the proffered phone and was soon engrossed, the light of the screen throwing stark shadows across her face.

Claire turned to look at Jeff, but she was unable to read his expression in the dark. Her throat contained no moisture and she sat mute waiting for her friend’s husband to speak.

“I saw Kim’s face, when Sky called out. I thought you might go home.”

“I tried to,” Claire managed to croak.

“Sky wouldn’t let you? Well, I’m grateful for her persistence. You need to speak to Kim, Claire. She’s got some terrible ideas in her head. She isn’t thinking straight. You need to talk to her.”

“What. Why? What’s going on, Jeff?” The quivering increased and Claire hugged herself in a futile attempt to control the shaking.

A bell rang loud in the silence. Claire jumped, and Jeff stood up. “I have to go. Kim needs me. Come and find her, after the show is finished. Talk to her. But don’t take everything she says to heart, please. Promise me.” When Claire didn’t respond he leant over. “Promise me?”

The clapping died away and Claire turned to see if Sky was ready to leave. Her niece was curled up in her chair, asleep. The sight raised a smile, although her facial muscles felt rigid and unresponsive. She wanted to scoop the child up and carry her to the car, but she wasn’t sure she would manage to take her that far. Jeff’s words remained in her mind. If he hadn’t elicited the promise, she would have left. His urgent speech had filled her with wild conjecture.

“Sky?” Claire gently shook her niece’s shoulder. The girl murmured and Claire was able to coax her upright. More asleep than awake, the girl allowed herself to be guided from the theatre into the cool night air.

As the chill stung her face, Claire stood motionless, unsure what to do. Jeff was right, she needed to talk to Kim. But now, after her successful opening night, and with Sky half asleep, didn’t seem like the right time.

Voices approached in the dark. It seemed Jeff had feared her resolution, and had left her no option.

Claire could see him pulling his new wife along like a naughty child. He caught sight of Claire waiting with Sky, and exhaled in obvious relief.

“There you are! Thank you for staying. Here, let me take Sky. Now, you two, talk.”

Jeff pulled Kim to stand directly in front of Claire, then scooped Sky up in his arms. He took the girl to a picnic table a short distance away, near enough to watch, but too far to listen.

Kim hung her head like an exhausted pit-pony after a twelve-hour shift. Claire’s heart lurched at the sight of the deep bags beneath her friend’s eyes. She wanted to pull her close, beg her forgiveness, but there seemed to be a barrier between them. Kim stared at the ground, one hand hanging loose, the other grasping tight to her elbow.

After an endless moment, Kim raised her eyes and Claire felt their impact like a blow. Kim held her gaze for a moment, then dropped her head once more, as if defeated by the effort.

Claire reached out a hand, but it didn’t quite cross the distance between them.

“I’m sorry. I’m sorry Michael guessed your secret from me, and blurted it out to everyone. Has the Director given you a hard time?”

She waited, unsure what else to say. The silence dragged like deep water and the snakes in Claire’s stomach writhed and twisted.

“It’s all about you, isn’t it,” Kim spat out suddenly. “Never a thought for anyone else. You didn’t wanted me to have the baby. You and your precious pact to never have children. Well, I hope you’re happy.”

The floor lurched beneath Claire. “What do you mean?”

“You always were slow on the uptake.” The venom in Kim’s voice felt like acid dripping into Claire’s heart.

“I don’t understand? Is the baby okay?”

“No, the baby’s not okay. Thanks to you, the baby’s dead. I hope you’re satisfied.” The last words came out on a sob. Kim curled her shoulders in, as if holding herself together, before running away, her cries of anguish trailing behind her.