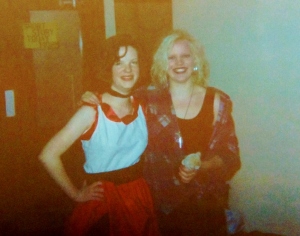 Me in sixth form (it was fancy dress, btw)

I stumbled across a great post in my reader today, about how hard it is for perfectionists to succeed. I used to think I was a perfectionist. I grew in a household of high expectations, particularly with regards to academic achievement.

I was the Straight A girl. When I got caught smoking by the dinner ladies, the first time I dared take a drag on school property, they threatened to suspend me for two weeks (or maybe it was two days, I can’t remember. With a single working mother, it wouldn’t have mattered if it was two hours, she still would have killed me). It took tears and form tutor intervention for the head of year to relent.

People got caught smoking all the time. A different head of year once told me to caution my bad-boy boyfriend (another story!) to stop smoking or he’d have to give him detention. Detention! Why was I threatened with  suspension? Because I was one of the top pupils, who won all the awards and aced all the exams. Apparently I was setting a bad example to the younger kids I was caught with. (Never mind it was their cigarettes I was smoking and I was only there in a supportive role to a friend who had received some bad news).

Anyway, I digress. Being the best was important. But at least at school perfectionism is quantifiable. You get the grades, pass the exams, win the awards. You don’t make many friends or learn any hobbies, but that doesn’t seem important. What’s worse is, you never learn to fail.

My first failure was not being accepted into the youth orchestra. (Apart from losing at sport, I did a lot of that, but sport is softly uncompetitive in state schools, so it rarely hurt.) It hurt not to get into the youth orchestra but I knew I was rubbish at violin and, besides, my Mum would have hated driving me an hour each way on a Saturday.

Then I failed to get into Cambridge University. But I was able to blame my tutors for lack of preparation (and I didn’t really want to go and was happy to get into the redbrick that was my first choice). The only thing that hurt was the snotty rejection letter, which I wish I still had! I even passed my driving test first time, goodness knows how.

There’s a theme, can you see? Until I graduated from university, I never failed at anything I cared about. Aside from relationships, and that’s a whole different endless anecdote.

Then I didn’t get a job I really, truly wanted. I was devastated. Crushed. I was a failure. I’d gone for something important to me, and I had not got it. Life over. Then, when I did finally get a job, I had a nervous breakdown before two years were out. Why? Because I couldn’t accept not being able to do everything that was thrown at me to the best of my ability. I couldn’t accept less than perfection. I was helping run a Guide unit, doing their accounts, training to be a leader and doing the Queen’s Guide award, working twelve hour days more often than not, and trying to keep up with new friends.

And I’d never learned how to fail, how to say no, how to say help! It took another twelve years for me to discover what my husband has always known: sometimes 65% is enough.

Now, with parenting, with friends, with housework, with my writing, I have learned that accepting good enough doesn’t mean I’m lazy, doesn’t mean I’m a bad person and certainly doesn’t mean I’ve failed. Too many times the kids have heard me say to my husband I’ve failed because I couldn’t find a school jumper, we ran out of nappies or the kids only ate pancakes for dinner.

The children had pancakes for dinner today. Cupboards are bare because the shopping doesn’t come until tomorrow. I haven’t failed. They’re fed. They had strawberries with them. They’ll eat veg tomorrow.

Kristen Lamb’s blog teaches that writers need to Ship. Whether it’s blog posts or novels, the only way to get better is to finish, get it out there and, if need be, fail. Writing a daily blog has taught me to ship: There are days I know my prose is nearer 40% than 80% but, hey, no one is grading me anymore, and the best I can do is hope to write something better the following day. Consistency is better than perfection.

What I have learnt, from the post I read today, and Kristen Lamb and others, is that the key is to fail forwards. Learn, move on, don’t dwell. It’s okay to fail.

Claire peered through the hatch, trying to ignore the stench of body odour coming from the man next to her. Breathing through her mouth, Claire focussed her gaze on the pewter sky and resisted the urge to tut. Red kites were impressive, granted, but they flew regularly over her parents’ house. She didn’t need to wait in a dim shed just to watch a bunch of them being fed. Her mum’s next door neighbour had a table at the bottom of the garden where she left meat for the kites. No big deal.

The numbers on her phone ticked over to 3 o’clock. Come on, come on. Claire tapped her foot impatiently, and then wondered what her hurry was. It wasn’t as if she had a more pressing engagement. The morning had been spent wandering around a thirteenth-century castle, including stumbling through a damp limestone cave in the bowels of the fortification, with a hired torch.

The views from atop the castle mound had been breathtaking and she’d collected a batch for the blog, including a few with cows standing in the foreground. It was an incongruous place, but she couldn’t face anything more strenuous, like canoeing or cycling. Kim’s wedding gave her the perfect excuse, if not one she could offer to Carl. In an attempt to avoid intervention from the dreadful duo, she had decided some more spectacular photographs were the answer.

The hostel manager had suggested this trip to the Red Kite Feeding Station, for more stunning photographs. So far all she had experienced was an olfactory attack from the other hide members and a desperate need to pee.

Three o’clock arrived, as did a man with a bucket. Two or three dozen birds had gathered in the area without Claire noticing. They flapped their wings in anticipation as the food arrived and circled above the feeding station.

Everything seemed to happen at once. The noise of beating wings was deafening, even inside the hide. The dull grey sky filled with birds, wing feathers pointing like splayed fingers. There were so many it felt as if someone had photo-shopped the sky, overlaying the same two or three birds over and over in different poses of plummeting motion.

The birds swooped down and rose at speed, talons full of food. Even with her smartphone, Claire was able to capture a few incredible images. No longer conscious of the smell emanating from the person next to her, she focussed her entire attention on the writhing mass of birds. Nature, red in tooth and claw.

And then they were gone.

Her heart still hammering from the adrenalin of it, Claire followed the others out of the hide and strolled to the café.

I’m sure when Carl insisted on high-adrenalin activities, he didn’t envisage they could happen without me breaking a sweat.