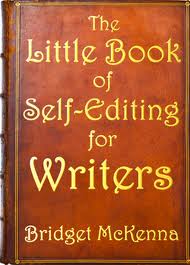 I had an unusual day today:I enjoyed editing.

I was fortunate to read a post by Rinelle Grey before I started work this morning, about her four favourite writing books. I have one, and one is to do with sales. Of the remaining two, I was drawn to one called The Little Book of Self-Editing for Writers by Bridget McKenna.

Discovering that it was less than the price of a latte, I downloaded it and started reading. Which nearly resulted in no Claire installment for this morning’s post! I managed to drag myself away to dredge up a miserable 400 words before jumping straight back in.

It’s not a long book and I only skimmed it, but it really helped me focus on what to tackle next with Baby Blues. I hope one day to really polish and polish it, and I know I shouldn’t publish it until that has happened. But hey, it’s out in the world already…

My aim is to erase it’s most awful sins speedily and get back to Claire, or I won’t finish my 2013 challenge. I probably wouldn’t finish Baby Blues either because it’ll go back in the bottom drawer. So, for a flying edit, the book is brilliant. Particularly the check list at the end. It suggests tallying up the things that shouldn’t be in your book. Adverbs, filler words, things like Just (257), That (1220), Really (125). I’m not surprised about the number of ‘Just’s, as I wrote a post about it!

The numbers were astounding, as much for the ones I didn’t have loads of as the ones I did. Not a single ‘Absolutely’ in the entire manuscript, even though I say it all the time.

I like numbers. They’re comforting. They’re a way to track progress. I didn’t used to be a marketing analyst for nothing. Numbers motivate me. It’s why editing is hard. When you’re drafting you can say, I wrote 7,000 words today, and smile at that. With editing it’s harder. Now I have numbers.

I started the day with 2040 words ending in ly. They’re not all adverbs, and not all adverbs end in ly, but what a great place to start. At the end of today, that number is down to 1760. I’ve managed to shave over 1100 words off the bloated manuscript total of 117,500, and fix several POV issues in the process.

It’s not the most structured way to edit, but it works for me. It was hard to tear myself away to vacuum upstairs and unpack the shopping. The dog almost despaired of her walk, although it’s glorious out here and I’m glad she convinced me. Lord knows what I’m going to do for Claire though. I want to get back to scrubbing out those adverbs. Not all of them – I’m not that patient – but certainly the easy ones.

I’m breaking all the rules of writing and deserve to be whipped, but quick fix editing? Yes please.

Claire registered the name flashing on her phone, and the world went still. She searched the empty lounge for a place to hide. Finding nothing, she turned her attention back to the phone, her thumb hovering over the buttons: green, red, green, red. Selecting one without looking, she held the phone to her ear.

The phone fell silent. Words came and went in Claire’s mind, but none seemed the right ones. She waited for Michael to give the reason for his call. At last she heard him draw breath, and she unconsciously held hers.

“I saw on Facebook that Kim’s getting married, weekend after next.” He paused again, and Claire had time to curse the innumerable connections that meant he could still keep tabs on her life. He and Kim were not friends.

“Yes, they decided to Carpe Diem. I’m maid of honour.”

She had a pretty good idea what he wanted, but decided to make him sweat. This time the silence lasted a beat too long, before words tumbled out.

Claire laughed. She couldn’t help it; she hadn’t expected him to be so blunt. What happened to the suave businessman, never at a loss?

“Yes, I follow the blog. How was your week with Sky?”

“It was great, well, until the end anyway.”

“Dad called to say Ruth had taken a turn for the worse. We had to leg it to the hospital.”

“What’s wrong with Ruth?” The sharpness in Michael’s voice reminded Claire that he had met her family; that Ruth wasn’t merely a name. She recalled, too, that she had yet to tell Michael of her sister’s illness. Hard to avoid it now.

“She has cancer. Well, she had a tumour, in her brain. They removed it, but it seems to have spread.”

“Oh, Claire. Why didn’t you tell me?” He inhaled, and she could imagine him running his hands through his hair. “Why would you cope with something like that alone?”

“I’m not alone, Michael.” The words were colder than intended. “I have friends, family. It’s kind of you to be concerned, but I’m a big girl. I can take care of myself.”

“But you shouldn’t have to.”

Michael’s words triggered a memory. Sitting in A&E thinking that, even though she didn’t need a man, it would be rather nice to have someone to take care of her. Then she remembered Michael’s habit of treating her like a Royal Doulton figurine, and decided there was a fine line between caring and suffocating.

“Ruth is in good hands. Mum and Dad are nearby, Robert came over and dealt with the doctors, and I can mind Sky whenever she needs. We’re fine.”

“And if you want someone to go to Kim’s wedding. You know, as a friend.” He paused, and Claire could imagine him replaying their meeting at the airport. She wondered if he regretted going to a wedding with Debbie as a friend.

The words of denial were on her lips, when another thought presented itself. Maybe I should let him come. Maybe that’s what we both need. What do the Americans call it? Closure? Maybe we need to see that we’ve outgrown each other. It’s been months now. What harm can it do? It’s not like it’s a romantic weekend away: We’ll be staying in bunk-beds. She chose not to remember her encounter with the Scotsman in a top bunk.

“I’ll have to ask Kim. You’re not exactly her favourite person, you know.”

“You dumped me, Claire. I’m not the bad guy in all this.” The rest of her words seemed to register, as he stopped abruptly. “Wait a minute; what will you speak to Kim about?”

“Whether you can come to the wedding as my plus one. As a friend.” She emphasised the words. “You can make yourself useful as an usher or something.”

“Whatever you want, Claire. I’ll be the perfect guest.”

Claire winced at the hope and excitement in his voice. Damn, this was a bad idea. Still, it was done now. She could always say Kim had vetoed it.

The idea of Michael coming to the wedding seemed to alleviate the dread she had been carrying round for the last few days. At least I’ll have someone to talk to, to distract me from all that romantic bliss. As long as Michael doesn’t find out Kim’s pregnant. That’s a discussion I do not need to have with him.

“Okay, Michael. No funny business and no guarantees. I’ll talk to Kim. If you do come, it will be purely to keep my glass full and stop me dying of boredom. I barely know any of Kim and Jeff’s friends.”

Claire hung up the phone. She felt like Pandora, wishing the box lid had remained firmly closed.