High Tea: now you see it…

I went to my first baby shower today.

They’re not a big thing here in the UK (or not in my experience anyway): we tend to make more of a fuss once the baby is born. It was lovely to be able to chat with the mother-to-be while she was awake and full of beans, rather than half asleep and exhausted, and for the focus to be on her rather than a bundle of joy that would rather be  feeding.

The interesting part for me was how, as a group of friends, we tried so hard to get the balance between supportive and honest. Five out of six of us already have children, so when the mother-to-be started sharing horror stories people have told her, about birth and after, we had to walk the line between ‘oh yes, that happened to me’ and ‘don’t be silly, you’ll be fine.’ 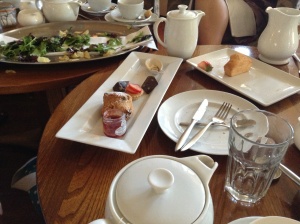 Really, though, what person tells a 33-week-pregnant woman all the details of episiotomies and C-sections? By that point you’re ‘on the train’, as my friend kept saying: it’s too late to get off.

Isn’t parenting like that though? Always running the line of honesty versus compassion when it comes to discussing it with people yet to get to the point you have reached? (Whether it’s babies or teenagers.)

It’s the same with the blogs I follow. Some of them are all about telling you it’s okay to be the less-than-perfect parent.

Like this one on the Scary Mommy blog about the school holidays. (Interestingly, some parents still feel the need to leave vicious comments along the line of ‘if you hate your kids so much, why did you have them?’ I mean, really? It’s meant to be hyperbole, it’s meant to be sarcastic. Don’t take it so seriously!)

On the other hand, some posts gently remind you, on occasion, to strive to be a better parent. Like this one from Raised by My Daughter about the glory of holding a child’s hand and being dragged off into their world of adventures. This was my response to the post this morning:

I really needed this post, thank you. My son’s nearly three and at the tugging, Mummy come see, stage. But I also have the 4yo insisting I watch her ballet or listen to her story. I confess the hand-pulling mostly irritates me because I’m generally too exhausted to get up. You have reminded me to try and find the energy to get up and go exploring more often and see it as endearing rather than annoying. Thank you!

So, to my mother-to-be friend, if I were to give you advice (which I won’t, because you won’t need it), it would be Don’t judge others, keep a sense of humour, and follow some great blogs.’ These two would be a good start (check them out, if you haven’t before).

Claire wandered around the china museum without seeing it. Her mind whirred with unwelcome thoughts until her skin tingled, vibrating like a busy computer. Fear for Ruth and Sky tangled with vague dread about Kim’s wedding. She was unclear whether it was the event that bothered her, or the fact that she would be attending by herself.

A memory presented itself at the door of her mind and asked to come in. Claire tried to deny it entrance, but it insisted. There in her head was a vivid image of Michael, with his ex-girlfriend Debbie, at Manchester airport. She could hear him speaking, although she wanted to block out the sound.

“We were coming back from a wedding. An old friend of Debbie’s. Debbie didn’t want to go by herself and I said I’d go. As a friend.”

The words swirled in an eerie rendition of Michael’s deep voice, like a sound-bite in a news bulletin heard on the radio again and again.

She considered it. But we’re not friends, not like that. If I invite Michael to a wedding, he’s going to get the wrong idea.

Claire followed the guide and tried to tear her mind away from unpleasant thoughts to concentrate on the here and now. She watched the spinning potter’s wheel, the capable hands moulding and guiding the clay into a beautiful shape.

I wonder if Kim would like a vase for a wedding present. Glancing at the walls of delicate pottery, Claire remembered the baby growing in her friend’s tummy. Not such a good idea. A weekend away at Ragdale Spa would probably be more useful.

Claire felt heavy, as she plodded after the guide and attempted to concentrate. Her limbs dragged down until they felt impossible to lift. With effort, she took pictures of the flickering light in the kiln, the fine china of the gallery, the conical chimneys, towering against a murky sky.

She scanned the area for café signs, but couldn’t see any.

“Excuse me?” Claire approached the guide, unaware whether she had interrupted her or not. Her muffled ears weren’t picking up sound as they should. The lady turned, a questioning look on her face.

“Is there a coffee shop here?”

The question was greeted with a look of bewilderment and Claire decided she probably had interrupted the guide mid-flow.  It was too late to be embarrassed. So what if this stranger thought she was rude?

“There isn’t, I’m afraid, but the Youth Hostel is a short walk away; there’s a café there.”

Claire nodded and turned to leave. She was halfway back to the hostel before she realised she hadn’t even said thank you.