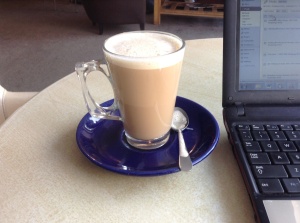 I love sitting in coffee shops to write. They are relaxing places: there is no housework, or staring dog begging for a walk. Sometimes I don’t get much writing done though, because I’m too busy eavesdropping on other people’s conversations.

This carries on from yesterday’s post on ‘Stealing memories’. Is it bad to eavesdrop on other people’s discussions and then steal some of their dialogue or mannerisms, filing them away for later?

I’ve been known to transcribe a conversation almost verbatim, so I could get a feel for the rhythm of the dialogue. I feel like a spy!

This morning I am meant to be writing my Claire post, having not had the energy to go near it last night, after a weekend of Farm visits and Children’s Parties. 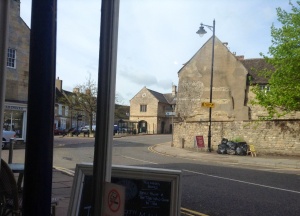 In fact I went to bed at 9.30pm aiming for a good night’s sleep to try and staunch the endless tears of tiredness, which would have worked well if Hubbie hadn’t come to bed at 1am, Amber crawled into bed with us at 3am then woke again at 4am! So, I need to write about Claire, but I’m too rung out and tired and easily distracted. I’ve come to a different coffee shop to my usual one, because I knew this one would be quiet and more conducive to writing. Unfortunately it’s too quiet and the chatter is harder to tune out.

Instead of working, therefore, I am listening.

Directly opposite me, as I sit on the leather sofa with my laptop on my knee, there are two women, one with a small child in a pushchair. The women are talking about artificial flavourings in food and how they teach children to expect strong-flavours and not appreciate real food.

The women are German. I’m interested to learn that children don’t go to school until six in Germany, and that their children had never before had baked beans or jacket potatoes (I hadn’t realised they were such British things). I love details like that.

At a table in the window sit a couple of ‘old boys’ who have been to the market and are enjoying a drink together watching the world go by. The distinctive blue carrier bags used by the veg stall cluster round their feet. ‘Old boys’ make me a bit sad because they remind me of my dad. He never really got to be ‘old’, as he died before he reached sixty.

Sometimes, though, I see men and want to adopt them. Like the man who has just cycled into town to do his shopping at the market and discovered he’s forgotten his wallet. I want to drive him home to collect it. 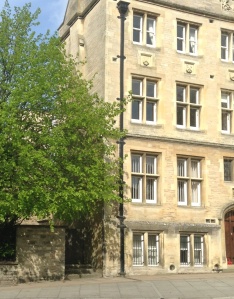 View from the coffee shop

I saw a man in a wheelchair at the Farm last week that made me think that’s what Dad would have looked like at eighty. He was having such a blast feeding the goats from his wheelchair, I felt a stab of nostalgia, although I wonder if I would have had the time and energy to push him round while caring for my young children. I did keep grinning at him, though. He probably thought I was nuts.

Outside the window the sun is casting shadows of dancing leaves against the pale yellow sandstone brick of the school buildings. Coffee shops can be such peaceful places. A little patch of calm and a microcosm of the world around, or certainly my tiny part in it. Part of me looks forward to the day when I can come to a coffee shop and just sit rather than busily typing away with my head down and my back to the world.

Right now, I’m trying not to listen to the German women talking about kids and food. I know my kids don’t have the best of diets – they spent the weekend eating rubbish for various reasons – but I’m just about okay with it. It doesn’t mean I don’t feel guilty listening to how hard other mothers try to get vegetables in their little ones! Sometimes eavesdropping isn’t a great idea. Let’s get on with Claire!

Claire sensed trouble the moment she entered Ruth’s room. A whole day without Sky spilling the beans was apparently more than fate thought she deserved. Pushing aside the argument she’d just had with Julia, about booking a week’s holiday from work, Claire took a deep breath and entered the arena.

“There you are, Claire. Sky’s just been telling me all about her baby sister. Would you care to elaborate? At what point were you going to share this element of your expedition?”

Oh crap she’s gone all school teacher on me. Ruth’s school-ma’m manner usually irritated Claire but it was such a relief to see her sister back to her normal self she smiled. It was a mistake.

“You think it’s amusing, do you? Cavorting with my Ex and that…” She grasped for a PG-rated word. “That harpy.”

Great insult, Claire applauded internally. Sometimes she forgot how smart Ruth was and that she’d also studied the Arts. It was too easy to remember the big sister who mucked about and got into trouble.

“I wasn’t smiling at that, just glad to see you with some fight in you. And I don’t think she’s a harpy.”

Claire realised the idiocy of her words as she watched Ruth’s face lose any hint of ashen pallor and turn a dangerous hue of red. She struggled against years of habit and forced herself not to fight back. Instead she perched on the bed, prepared to be conciliating.

“Sorry.” She reached a hand towards Ruth, and dropped it again at the expression on her face. “All I meant was perhaps now isn’t the time to discuss the merits of the woman.”

Claire looked meaningfully over at Sky and almost laughed again at the mixture of shock and glee on the girl’s face. Her Mum and Auntie scrapping like school kids was high entertainment.

“The truth is I didn’t tell you because I knew this would be your reaction and I wanted to tell you when you were better. The meeting was accidental,” The first one at least, Claire thought guiltily, “And I gave Chris both barrels, I promise you. Then he produced the child. Sky should know her sister, particularly –” She stopped, unable to continue. Ruth’s face resumed the colour of milk and her eyes dilated in horror.

Claire felt sick. Oh God, that’s going to finish her off. The idea of Sky living with her Ex, the woman that betrayed her and their new baby is not something Ruth is strong enough to handle. Then another thought drifted into Claire’s mind. The kind of horrible thought that couldn’t be undone. Maybe this will give her what she needs to fight the illness. The knowledge that, if she dies, Sky will go to them.

Similar ideas appeared to fill her sister’s brain. Her face contorted as she processed too many unwelcome images. Pressing her lips into a tight line, Ruth glanced at her daughter then back to Claire.

“We can talk about it later.”

Claire had enough sense to recognise the finality in her sister’s voice and dropped the discussion. Sky didn’t.

“Does that mean I can see Daddy and the baby again, Mummy? Please. I won’t talk to the harpy.”

Claire stifled a snigger. She’s sharp that child. Either that or she’s vicious.

Cornered, Ruth just shrugged. “As long as I don’t have to bear witness.”

Claire wasn’t sure if that was a concession or a way of saying over my dead body. It was no longer a phrase to be thrown around lightly. Let’s hope it never comes to that.