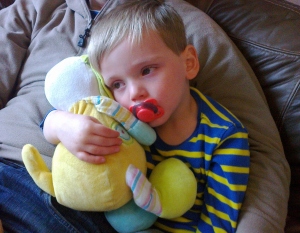 Today is a day when I wish I’d done less cleaning on my last nursery day and remained a Claire post ahead. Because – although the clean house is nice – Family Martin has Man-Flu.

We’ve never ALL been struck down simultaneously before. I’ve had to write drug distribution on the chalk board because my brain is fuddled. It hasn’t been divide and conquer so much as Divide and Survive.

Still, being the heroic one who took the kids to the Farm – after a quiet morning and some calpol meant they were too full of beans to be indoors – I got to go back to bed mid afternoon and finish my book. The Amazing Maurice and His Educated Rodents. A marvellous book. I love Terry Pratchett. I love the sophistication of his world building and the insidious nature of his social commentary.

This children’s Discworld novel discusses morality and religion in a way that hasn’t affected me since Granny Weatherwax in Carpe Jugulum. I’m not very good at reviewing books because I can’t tiptoe around spoilers (and I hate spoilers). All I’ll say is this is a book I really hope my children read, as it approaches philosophical questions of what makes me me; ideas and beliefs, shadows and darkness, in an accessible and compelling way. It also deals with Stories: what constitutes a story, the difference between stories and the real world, including a ‘real world’ rather than ‘fairy tale’ ending. Terry Pratchett at his best.

I don’t think it gives anything away to include this quotation, which I believe encapsulates what religion should be about (as someone who isn’t particularly religious):

If there is a Big Rat [God], and I hope there is, it would not talk of war and death. It would be made of the best we could be, not the worst that we are. No, I will not join you, liar in the dark. I prefer our way. We are silly and weak, sometimes. But together we are strong. You have plans for rats? Well, I have dreams for them.

Claire turned her head at the unexpected sound of Sky giggling. After an hour moaning in the car that the iPad battery was flat and twenty minutes of shoe shuffling and whining in the queue, Claire had forgotten that her niece could laugh. The decision to come to Merrivale Model Village already seemed a bad one, and they’d only been inside ten minutes.

We should have done Sea Life. I could have bought a coffee and left her to it knowing she couldn’t damage anything. If I leave her in here she’ll probably trample on the exhibits or start playing with them. Seeing her niece still waving and jiggling up and down, Claire swallowed a sigh and went to investigate.

“Look!” She pointed at the scene in front of them. “That little woman is…” she lowered her voice to a whisper that probably carried to the edge of the village, “showing her boobies! See?”

As if confirming Claire’s worst fears, Sky took a deep breath and said, too loudly, “why is she showing her boobies, Claire? What are the policemen doing? Did someone steal her clothes?”

Looking round wildly for assistance or guidance, all Claire could see were other parents trying not to smile. Avoiding eye contact, Claire wrapped her arm around Sky’s shoulder. “Don’t talk so loud, darling.”

“Why not?” Sky’s voice would have filled the O2 Arena.

“Other people are trying to enjoy their afternoon out, that’s all.” She hoped her niece had forgotten the interrogation about the streaker, but she was out of luck.

“Why didn’t she have a top on? Was she sunbathing? Sometimes Mummy sunbathes without her top on in the garden.”

“Um. I’m not sure. Why don’t we go and look at the train? Or the high street?” She pulled at her niece’s hand and led her away from the traitorous football match.

The Whys didn’t stop: It turned out the hospital was full of realistic details, like some poor man having his leg sawn off. “Why are they cutting his leg, Claire? Is he poorly?” Then, “Why is there smoke coming from that house? Is it on fire? Why haven’t the firemen put it out?” Even the castle let Claire down. “Why does the princess have a pointy hat, Claire?” Unable to remember whether it was called a wimple or a hennin, Claire once more resorted to her stock phrase, “I don’t know, darling,” all the while cursing the quirky nature of the model village.

I guess you have to have a sense of humour to run a place like this. Claire looked at the Boggitt and Scarper builder’s sign and the Lord Help Us Hall and smiled. How much time does it take to put all these people in position? If you couldn’t have a laugh you’d go bonkers. Claire read a tiny sign declaring, “Keep off Grass, Guard Ducks Patrol this Garden, Survivors will be Prosecuted,” and laughed out loud. Maybe the sick humour is to keep the adults amused. God knows it must be boring to be a parent at a place like this. Or anywhere.

She tried to tune out the Whys, but discovered if she didn’t answer quickly enough, Sky’s voice became louder and more shrill. As the question was usually one Claire didn’t want to hear echoing amongst the milling families she had to respond swiftly and with detail. ‘I don’t know, sweetheart,’ had apparently lost its effectiveness.

Claire felt drained and defeated, as if she’d been wrangling in a Board Meeting for two hours, rather than wandering with a six-year-old for twenty minutes. In desperation she gazed round the site, longing for something safe to distract Sky’s inquisitive mind. She caught sight of a sign and her heart lifted.

Claire thought about the rare visits to Uncle Jim when she was Sky’s age. He would take his nephew and nieces to the amusement arcades, a bag of tuppences hanging heavy in their pockets, gleaming highlights in their eyes knowing their parents would definitely not approve. They would gorge themselves on candy floss and stand at the machines for hours, feet welded to the sticky floor, the smell of cigarette smoke in their nostrils from Uncle Jim’s rolling tobacco.

With her mind and heart full of happy memories, Claire shone a sparkling grin at Sky.