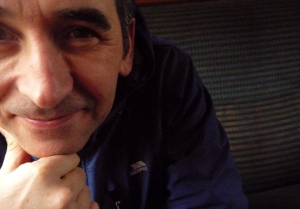 Today was the last week-day with all of us at home together, hopefully for several weeks. Hubbie starts work on Monday, fingers crossed, and will be out the house from breakfast to bedtime (the children’s bedtime that is – I rarely snuggle under the duvet before midnight).

The little ones are going to miss him and – for all my moaning about space and routine – so will I. Today was a fairly typical day in our recent lives. I stayed in bed writing my blog while Daddy fetched breakfast for the kids (The lie-in was allowed because I spent last night formatting hubbie’s manuscript for Kindle).

I got up around 9am and took over child care, although I actually baked a banana cake while the kids were in the toilet, not realising 2yo was wiping 4yo’s bottom (a job I still do normally, since she got a bad infection). Poor hubbie wasn’t quick enough out the house, so ended with the clean-up job. He won’t miss doing that, I guarantee it. [Just re-read that bit: too much information. Sorry.]

Hubbie then escaped and came in only for cake and lunch. But he was there, pressure-washing the decking and patio, where we could see him. At 5pm I legged it to the shops, having realised earlier that I had no gift for the party Amber’s going to tomorrow (blame the illness!). I tried to go earlier with the kids but they were resistant and I was weak in my still-a-bit-ill fragility. Got back from town an hour later to find the kids playing football with Daddy on the sparkling clean decking. I unloaded the shopping and left them to it, after a quick kick about, to come walk the dog.

The only downside to the day I can see is that hubbie’s clearly had too much childcare duty and is losing his sense of humour. I don’t think he’ll be sad to miss breakfast to bedtime. And once we hit our stride the kids and I will be fine too. But it’ll take some adjustment, as all routine changes do. At least the longer days mean I’ll still be able to walk the dog when hubbie gets home. Not sure what’s going to happen to Claire, when I lose my precious mornings in bed dreaming up her adventures. Certainly the quality of my writing has been badly affected by two days of illness, so I guess we’ll see.

Claire glanced at the slumbering child in the passenger seat, and smiled. I survived my first twenty four hours with my niece out in the wild, with no A4 sheet of instructions to guide me. Honesty compelled her to add, just about.

She thought about the lunchtime battle to get Sky to eat her sandwich, which had unexpectedly resolved itself when Claire got up and left the café. She had only been aware of a need to put distance between herself and the tantrum. Standing outside the door, watching her niece turn purple in fury, was definitely a low point in the day. The outraged looks on the faces of the other customers in the tiny and crowded room had caused Claire’s face to take on a similar hue, albeit for different reasons. Their looks of condemnation prevented her re-entering the room, even when Sky stopped crying and sat – shell-shocked and alone – at the wobbly Formica table.

The quiet and contrite child who had emerged ten minutes later seemed to justify the action but Claire had been conscious of a terrible surge of guilt at her behaviour. She’s the child not me. Sky took back her angry words of hatred and declared she loved her Auntie Claire so no lasting damage seemed to have resulted from the incident.

Still, I hope it doesn’t happen again. What if we’d been in Starbucks or a restaurant instead of some tin pot coffee shop? Claire thought of the decibels of noise that had leaked through the prefab walls and shuddered.

There was more to this parenting lark than first appeared. If Sky hadn’t been an angel since lunch she would have been strongly tempted to take the girl to her Dad’s; to spend the two week Easter holiday with reinforcements. It just confirms my long-held view that I wasn’t born to be a mother. Auntie maybe, but that’s it. Michael was wrong when he said he saw maternal feelings in me. Silly deluded idiot. Unhappy memories of that night swirled around her in the car. Claire gripped the steering wheel and frowned them away. There was still an hour’s driving to the hostel she had booked them into for the night.

She turned the stereo on to Radio 3 and drove into the evening with Mozart and a peacefully sleeping girl for company.