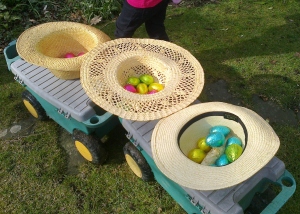 Goodness me, the end of March already.

This post will mark the 90th Day of my 2013 Challenge, producing around 72k words of first-draft novel. I have collated a volume ‘the story so far’ which will be available on Smashwords shortly, as well as Volume 3 just for the March installments. Thank you to everyone who has come along for the journey – your presence and support is the only reason I’m still going!

We had a busy day today, with a trip into town in the morning, followed by a birthday party two hours away with family friends. My little girl was a superstar during shopping: following Mummy from one shop to another while I tried to find a frame for an art commission and some all-in-one waterproofs for her and her brother.

Look at our fab new t-shirts

Failed on both counts.

The one frame that was big enough was the wrong colour, and all the shops are stocking spring clothes, despite the snow and 2C temperatures. Didn’t want to go home empty handed so I bought the kids new t-shirts and Amber some gorgeous skinny jeans like I used to wear in my twenties. How long ago that seems!

The party was brilliant. My friend’s in-laws live in a gorgeous house in Derbyshire, surrounded by hills and rivers. I stood at the kitchen sink and watched the river sparkling in the sunshine. From the lounge the hills climbed up to the sky. One day I hope we’ll live somewhere so beautiful. 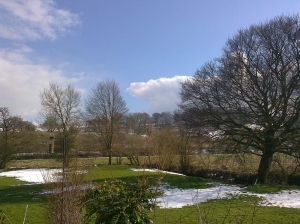 My friends had arranged an Easter Egg hunt for the four children in the garden and the snow stopped long enough for us to find them all. The sun even came out and warmed our skin for a wee while, giving the promise of spring. The kids then disappeared off to play Families and I had a chance to sit and do nothing.

We don’t have family to ‘visit’ during the holidays as ours all live close by, so we never get to stay and be taken care of. My Dad used to make me tea for me and let me have a lie-in when I visited. At my friend’s house her in-laws took care of all of us, including a lovely evening meal and endless cake. Even though it was 11pm by the time we got home and put the children to bed it still felt like a wonderful, relaxing day. My last Claire post for Volume 3 will be written in the morning though (British Summer Time starts tomorrow. Ha Ha.)

The clock ticked over to 2.37pm. Claire swore and shifted down a gear. Come on car, you can do it. She eyed up the dirty rear of the lorry and tried to gauge whether she could overtake it in a car with a top speed of 75mph.

2.38pm. I don’t have any choice. If I follow this bloody lorry all the way I’m definitely going to be late. She gritted her teeth and dropped down another gear, ignoring the awful screaming from the engine that made her teeth ache. Then, praying to the Gods of motoring for the second time that day, she pressed the pedal to the floor and swung the wheel, until the Skoda leapt across to the other side of the road.

In the distance a red car sped towards her. Claire stared at it through narrowed eyes, then looked at the lorry. It was longer than she had realised. She wasn’t going to make it. Damn. With a thudding heart and a metallic taste in the back of her throat, Claire eased off the pedal and dropped in behind the lorry. She’d just turned off her indicator when the red car whooshed past.

Claire felt tears stab the corners of her eyes. I miss my Audi. I’d already be in the coffee shop round the corner, having lunch and getting myself ready for two weeks of hell. Instead I’m going to be lucky if I get there before the teachers start calling her mum, wondering why she hasn’t been collected.

A wave of dark washed over her and she gripped the steering wheel until her knuckles nearly broke through the skin. This was a stupid idea. How am I meant to keep a tiny child alive for two whole weeks if I can’t even pick her up from school on time? Face it; I’m a flake and a failure. Maybe Carl’s right to be trying to sack me. Perhaps I’ve always been useless and I just never realised it before.

Instinctively Claire slowed the car, as she saw the lorry’s brake lights in the gloom of the overcast afternoon. Oh god, not traffic too. This isn’t funny. Then she saw the indicator light and realised the lorry was pulling off. Hallelujah: Some luck, at last. As soon as the lorry was clear she pushed the pedal hard and hoped there were no traffic enforcement vans parked up to catch her out. A fine I can handle, but if they pull me over they’ll be arresting me for grievous bodily harm.

At last Claire saw the sign for her destination. She turned off and sped through the winding streets of the town, not caring for once if anyone was condemning her driving. She found a parking space behind the school –in itself was a miracle – and was out the door almost before she had her seat-belt undone. Running up the lane behind the school, Claire checked the time on her phone. 2.59pm. Phew, I’m going to make it. Thank god.

She was puffing by the time she reached the school gates, and the blood pounded loudly in her ears. Bending over to catch her breath Claire finally realised something was wrong. It was quiet. Too quiet. Aside from the whooshing in her ears and the rasps of her breathing she could hear nothing. No chattering mums, no high-pitched voices. She stood up slowly and looked at the front of the school, where a row of scooters normally stood like a racing rainbow.

Checking her phone again, Claire confirmed it was the right time and day. Oh god, don’t tell me I’ve got the wrong school. I’m positive Ruth told me she came to this school. Yes, I’m certain we drove past once and she pointed it out.

Claire felt the blood drain from her face and the hollowness in her stomach spread out until it consumed her.

Where the hell is Sky?

She slumped against the wall and gave in to the tears. Ruth is going to kill me.