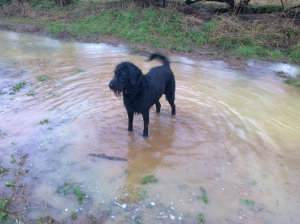 My kids sing a song they must have learned from nursery. I don’t know it* and they only know one line but it’s definitely becoming the anthem of our winter here in the UK:

The rain came down and the floods came up.

They sing the one line, together with actions, over and over when we’re in the car, until I feel like I’m in a Stephen King novel.

*Turns out it’s called The Wise Man built His House Upon the Rock. And I thought it must be from a Noah and the ark song.

We did indoor play again today, meeting up with an old friend and her family. It’s great to combine forces at these places so you can take it in turns to be the hamster in a cage. Taking the Daddies is even better because little girls love spending time with Daddies (it doesn’t have to be their own: Amber does adopt-a-daddy all the time. Sometimes with people we don’t even know which is a bit embarrassing).

It snowed heavily while we were tucked inside but it soon turned to rain and the roads were flooded as we drove to my parents’ house. If it keeps raining we’re going to be Oundle-on-sea (we’re on the edge of the Fens which, if you don’t know the UK, is a large area of reclaimed wetland. It’s very flat.)

At least the dog likes the wet weather. She is part labrador and has webbed feet so she loves being in the water. Normally she swims in the river but, when it’s swollen with flood water, she doesn’t fancy it. Instead she races up and down the flooded fields at high speed. I tried to take pictures but I only had my phone with me. But you get the idea! 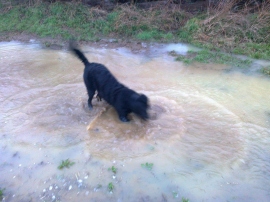 We saw friends of ours out puddle jumping in the afternoon: the three little kids all in waterproofs and wellies. I felt guilty because we were watching our second movie of the day, wrapped up in the lounge. Our kids have had way too much screen time this winter. I don’t mind the rain but when it’s zero degrees outside that’s too chilly to get soaked! (They have colds, so that’s my excuse sorted).

Anyway, today’s installment is going to be written in the morning as I have a date with the Got To Dance final on Sky One tonight. I’ll be bereft when it’s over but I’m very much looking foward to the final live show.

P.S. We ended up watching the final with a small child asking questions all the way through. We made the mistake of letting her watch the Little Princess episode ‘I don’t want to go to bed’ at bedtime, which is all about a little girl who doesn’t want to sleep alone. Big Mistake. HUGE. We’ll have days of her not wanting to sleep alone now. Must delete it from the Sky Plus!

Never mind, the final was still great and the right person won. If you don’t watch it, check out the video of Lukas McFarlane’s first live performance. Awesome.

Claire turned and studied the ornate building of Castleton Losehill Hall as she walked away from reception. I thought it looked like a gothic mansion when I arrived. I never imagined I’d be living one of Ann Radcliffe’s more lurid tales while I stayed here.

Meandering through the corridors and courtyards of the hostel that morning, with a bandage on her head and purple bruises on her cheek, it had been easy to picture herself in the pages of a Victorian drama. She’d ignored the giggling kids as she’d perched on a bench, lost in a nineteenth century world of mad counts and ephemeral ghosts.

Maybe Sergeant Cornhill was right, maybe I do have concussion. Claire tried to remember what the woman had told her the night before about the symptoms of a head injury. Confusion, inability to make decisions, tiredness. How is that any different to how I feel on any normal Sunday morning? Her laughter sounded fake even to her. Maybe I will pop in and see a GP before I head to the next hostel. Seeing as I don’t even know where I’m going today.

Claire stopped on the path and stared at the dirty-grey clouds scudding across the sky, strung out like dingy washing. What am I doing? I need to at least know what hostel I’m going to. Her only thought, after her morning of musing and wandering, was to get away and put the events of the previous evening behind her. Now the idea of driving past the scene with no clear intention or destination made bile rise in her throat. She hitched her rucksack up on her shoulders and headed back into the hostel. Maybe I’ll just have a quick look at the website, at least find the nearest hostel. I’m meant to have a quiet day today anyway, Sergeant’s orders.

Claire walked through the glass lobby and scurried to a corner before the manager on duty asked her what she was doing back. She wasn’t sure if she was allowed in the building after check-out and her head ached too much for a confrontation.

Within the space of a few minutes she had loaded the YHA site on her iPad, thankful that she still had it to plug the aching hole left by her stolen phone. The nearest hostel was apparently Hathersage. When Claire read the description she laughed loudly before wincing at the rattling pain it caused in her head.

She smiled as she reread it. Well, I’ve lived the Gothic story, why not go and wander in the home of the finest Victorian novelists? Maybe I’ll meet the ghost of Heathcliff or the mad woman in the attic. Maybe I’ll be the mad woman locked in a garret. It might be nice to hide from the world for a while. Claire thought about the phone call she needed to make; the thank you that was going to stick in her throat like dry toast.

Yes, I think it might be nice to hide.