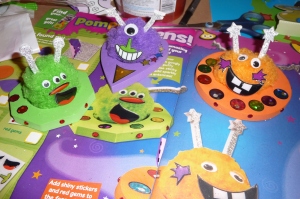 Amber’s Magazine-craft Aliens (made with Daddy)

I managed to bribe my son into nursery today with promises of a buying a new magazine tomorrow (the kids love getting magazines, but they’re so expensive!).

He still didn’t quite manage not to cry. Poor wee man, my heart went out to him. We’re all so poorly at the moment none of us know where we are. (Turns out they’ve had Scarlet Fever at nursery and I suspect that might be what Amber had last week. Maybe even Aaron. Poor buttons.)

Luckily his big sister was there to help him settle today – goodness only knows how he’ll cope when she starts school in September. Hopefully by then he’ll be more confident, having survived the terrible twos. (I find the threes are the tiresome threes but that might just be me!) 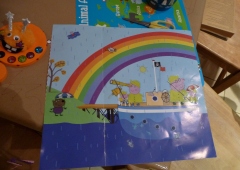 Talking of terrible twos I stumbled across a new blog today that had me laughing so hard I wept. I love those moments when you just can’t stop laughing and every new gem makes you laugh harder.

I only found the blog because the author liked yesterday’s post (and I lost the ‘like’ when I had to replace the post with the full one. I got caught out by scheduling a half-finished post and then not having internet access.) Anyway the blog is theclothesline.ie and these are my favourite posts (though I loved many more)

Things I am Banning from My House 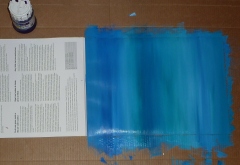 Painting for a card commission

Today has been about catching up with the blog, painting card stock and learning about Smashwords. I really want to get January’s posts up for free but I don’t think I’ve had enough sleep to read the style guide without nodding off (that is not an aspersion on the quality of the guide but due to my cold-drenched state!)

For once I’m actually looking forward to sitting down with the children tomorrow to do craft. I think that’s about the limit of my current mental powers.

Update: I did manage to plough through the Smashwords style guide and – hurrah! – the first volume of instalments is now available FREE on Smashwords. Just follow the link in the margin. It wasn’t a bump-free road. The style guide you can download is essential and easy to follow. However despite my very best efforts I still have a persistent blank page between instalments 23 and 24 which will probably stop the book being accepted into Smashword’s premium catalogue. I don’t really mind, it’s free after all so it’s not about making money, it’s just bugging me. I’ve uploaded five new versions but can’t seem to fix it.

Josh grinned up at Claire from the gorge below and cupped his hands to his mouth. “That’s the general idea. Just do what the man tells you, you’ll be fine.”

His words were barely audible over the sound of rushing water and the thudding of Claire’s heart beneath the harness.

“Okay Claire, there is nothing to be scared of. You’ve seen the others do it and they’ve all been fine, haven’t they?”

Claire dragged her eyes away from the yawning space beneath her and looked at the owner of the voice. He seemed to expect something from her so she nodded, not trusting herself to speak without swearing or sobbing.

“So, what we’re going to do is talk you through it one step at a time. You trust me, don’t you Claire?”

His voice was safe, like a kind GP or a favourite Uncle. His rich Cumbrian accent washed over her and she found she could breathe again. Then her eyes were pulled to the drop beneath her feet and her lungs once more emptied of air.

“This is no different to the drop you did at the training centre. You just need to turn around and lower yourself backwards. You don’t even need to look down.”

“I don’t need to look,” Claire bit out through clenched teeth. “I can hear the sound of the damn waterfall smashing on the rocks fifty feet below me.”

Part of Claire’s brain wondered at what point Dave’s patience would snap and he would either push her over the edge or give in to her demands to be freed from the harness. The pep talk before they left the centre to walk down had informed them all that even those terrified of heights would be encouraged to descend the 17m drop into the gorge and that the thrill of abseiling down the side of one of The North Pennines’ highest waterfalls always encourages cheers and applause. Claire glanced down at the group of faces peering up at her from below.

I don’t want a sodding clap I want a drink.

She picked out Josh’s face from the crowd. He is not going to let me hear the end of it if I chicken out now. It’s his fault I’m here in the first place. Him and sodding Carl.

Claire let her mind drift back to the email she had received from Carl that morning, just after check-in at Alston YHA.

Claire, we feel your blog needs to be spiced up a bit. Coca Cola are concerned that you are not promoting the outdoors enough. Hiking and biking is all well and good but they want to see more adrenalin. Try for some rock climbing, abseiling, maybe a sky dive. Make sure you post pictures. Carl.

The swearing had gone on for some time but when she had shown Josh the cause of her expletives, he’d merely laughed and said “Good on him.”

She wondered now whether Carl and Josh were in secret collusion to maximise her humiliation.

“If you set Carl up to this Josh you can kiss goodbye to your free ride.” Claire’s words were lost in the spray from the falls. She turned back to face Dave and caught him exchanging grimaces with a colleague. He quickly smoothed his face back into a mask of patient concern but it was too late.

Roll your eyes at me will you, you silly old man? We’ll see about that.

Claire took a short step to the edge of the gorge, threw a glance at Dave’s mate to make sure he was gripping the rope, and tipped herself backwards. Her feet skidded on the slippery wall and all plans of walking slowly down the gorge vanished. Her stomach shot up to her chin as she fell down the cliff-face until she felt the harness catch under her bottom. The motion caused her to spin and her vision filled with alternate views of white water and dark gorge. Freezing spray drenched her and the roar of the rushing water rang through her head.

The world stumbled to a halt as Claire hung suspended from the bright yellow rope; the only primary colour in a field of muted greens and greys. The few seconds it took to lower her to the ground dragged by but eventually Claire felt her boots touch rock. Traitorous knees failed to support her and she landed in an ungainly heap on the wet stone as the rest of her group whooped and clapped.

“Good on yer, Claire.” Josh rapped his knuckles on Claire’s helmet and beamed at her.

She glared up at him for a moment before reaching up her hand. “The least you can do is help me up, you bastard.”

“Hey, it wasn’t my idea. You said you needed high-adrenalin stuff for Blog Fodder. Well, how’s your heart rate? Is she pounding?” He pulled Claire to her feet and leaned in close. “Nice arse by the way. Great view.”

Claire felt the blood heating her frozen cheeks. She considered pushing him into the water but decided she’d save her vengeance for later.

“I hope you got a picture of something other than my rear, I’m not putting that on the blog.”

“Aw, go on, that’ll get the punters coming for sure.” He winked. “No pun intended.”

It was only once she had trudged all the way back to the centre and handed in her gear that Claire realised what he had said.