Amber’s photo book and the one I made for Aaron

Had to write post #33 this morning as I was too tired and poorly last night, which nearly made us late for a birthday party (that and husband couldn’t get out of bed!). I’ve got behind on the daily blogging and am having to write too many of the posts with the kids awake. Must use the next nursery day I get to catch up as it’s impossible to write these posts with the kids yelling at me. (Plus the guilt is all-consuming!)

Parties are always touchy things – they can be overwhelming events and this one was no different. It was at an indoor play area (the kind with ball pits, crawling tunnels and slides).It’s the sort with two levels and Amber got upset if she couldn’t see a parent easily.

Thankfully husband and son came too so we took it in turns to go crawling around after the kids. Okay so I mostly chatted with the Mummies while Daddy did the crawling but that was only fair as I took them to an indoor play centre yesterday and spent three hours like a hamster in a cage.There was also a face painter which is such a great idea. My kids love having their faces painted.

This afternoon we did one of Amber’s birthday gifts – a “make my own book” craft kit. I wasn’t looking forward to it because I’m a perfectionist so it’s tough watching her cover everything in glitter and stickers.

I spent the time printing out photographs and putting double-sided sticky tape on the back of them while trying to ignore the glitter-fest. I do get told off for taking over and sticking things straight but there’s always a fine-line between letting the kids do everything themselves and helping them create something they’re proud of and will continue to be proud of.

Amber as a cat

This evening was all about Rattle. Rattle is Amber’s comforter – a tatty, much loved teddy that someone gave me after they won it in a tombola and saw me with my baby bump. We used to have two (I tracked down a spare on ebay in the US when I realised how important it was becoming) but Rattle2 “went on an adventure” a year or so ago. We tracked another one down in the US recently and had it shipped to my sister. Unfortunately “new Rattle” has been rejected for, well, being too new. 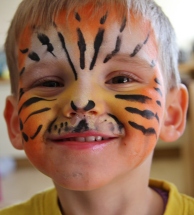 Aaron as a tiger

Four years of love has made the original Rattle grubby, lumpy and chewed.

Anyway at bedtime this evening we realised Rattle had been left at the indoor play area. They were still open so we rang in a panic and they couldn’t find him. A very sad girl sat hugging New Rattle and sobbing. Thankfully I thought to text the party girl’s mummy and she had picked it up. Better still her wonderful husband drove the dozen miles over to our house to drop him off. Hurrah, child can sleep.

Right, time to think up a new adventure for Claire. I wonder what will happen today. I honestly have no idea until the point at which I open the Word document and start typing.

“Bagsy I get the bottom bunk; I rather fancy you on top.” Josh’s laughter rang round the small room as Claire glared at him and wrapped her arms around her midriff.

“It’s bad enough that you talked me into sharing a room with you. I can do without the suggestive comments. Don’t push me or I’ll go to reception and move to a dorm. Then you can pay for this whole room by yourself.”

“Surely you’d rather share with just me than a room full of chicks you’ve never met? They might snore.”

“You might snore for all I know. Besides I’ve learned my lesson on that one, I have ear plugs. And don’t think about trying anything either. I’m not interested in a travelling romance. If I hear you climbing that ladder in the night I’ll stick a pin in you.”

“Don’t get your pants twisted Claire I’m a perfect gent. I don’t pursue where I’m not welcome.” He said the words with a glint and Claire was conscious of a warm flush rising up her neck. Ignoring the betrayal of her body Claire dug through her rucksack to retrieve her night-dress and wash bag.

It didn’t take long to discover that the hostel had no hidden delights, apart from a little corridor conservatory along from the lounge which was probably lovely in the summer. The whole place felt in need of a refresh, particularly after some of the places Claire had stayed in already. It was like visiting her Gran’s house, before she died. At least it doesn’t smell of boiled cabbage.

“What do people do when they’re hostelling?” Claire sat on the edge of her chair and looked with puzzlement at Josh’s sprawled form.

“Whatever they want. Read, listen to music, chat, meet new people. If you’re lucky someone will start jamming.”

“You know, playing the guitar, singing.”

It was Josh’s turn to look perplexed. “What did you do to relax when you were at home Claire?”

Claire gave the question some thought. “I didn’t. I was either at work or out.”

“Where did you go out then? You must have had some fun.”

“Oh yes.” She thought about nights drinking with her friends. And then she remembered Susannah’s comments at her leaving party and wondered if they were really friends or just colleagues who bitched about her behind her back. Images of Sunday morning brunches with Michael, and walking in the park to let the wind blow away their hangovers, besieged her brain. They were unwelcome memories and she shoved them away.

“That’s different, though,” Claire continued. “That’s at home with friends and access to a decent wardrobe. What do you do with a sack full of unwashed clothes and no one to party with?”

“You don’t need clothes to party.”

Claire sniggered, drawing a ready grin from Josh. “I didn’t mean it like that but, yes, that’s one way to party. What I meant was you don’t need to dress up to have fun.”

Claire raised an eyebrow at Josh’s stained clothes, muddy trainers and unkempt hair. He wouldn’t even be allowed in to Tiger Tiger.

If Josh was aware of Claire’s critical scrutiny he didn’t show it. Instead he swung his legs down from the arm of the chair and sat forward, making eye contact. “I asked at reception when we checked in, apparently there’s a pub next door that does a bonzer steak pie. Come with me, we’ll have some nosh and I’ll show you how to be social when you’re on the road.”

Claire looked down at her travel-creased clothing and pulled at her greasy hair. “I could really use a shower and a change of clothes.”

“No, you come as you are. Most of the people in there will have been hiking Hadrian’s Wall all day. There won’t be any glamour, you’ll fit right in.”

Unsure how to take his last comment, Claire grabbed her purse and followed Josh out the door.

If nothing else it will be content for the blog. We’re only going to eat a meal and chat with some people, I used to do that all the time at work. How different can it be?